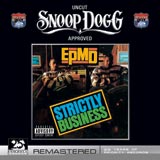 Two out of three ain’t bad. Celebrating their 25th year in business, Priority Records gives us three of the biggest albums, newly remastered. EPMD’s debut is an absolute classic, from “You Gots To Chill,” “It’s My Thing” to “Jane,” I had to have gone through at least two copies of this on tape before I upgraded to disc. Eazy-E’s solo opened the gates to the better part of a decade of West Coast domination in rap and popular culture as a whole. Eazy’s voice, the words of Ice Cube and MC Ren and beats from Dr. Dre made 1988 a great year for subwoofers. Generally, the less said about Master P’s music the better. This album contains his ode to constipation, “Make ’Em Say Ugh.” The series is soiled a bit by incoherent liner notes written by Priority’s newly appointed “Creative Chairman,” Snoop Dogg, and art direction detracts from the original covers, but if you don’t have these EPMD or Eazy-E discs in your collection, there’s no better time than the present.