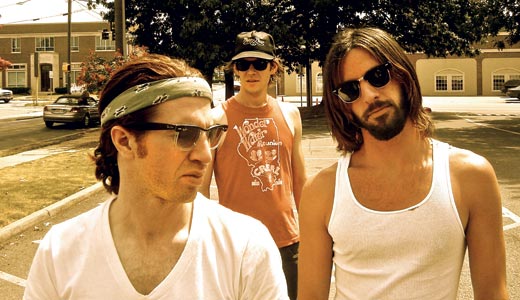 LEO: Are you all out on the road already?
Tim Deaux: Actually, I’m in my front yard. We’re home for a couple of days. We’re not really touring right now, just playing a few shows here-and-there. We’re pretty much home gearing up for the album release, and then the tour that starts in February. Taking advantage of the nice southern, warm weather we’re having here right now. It’s amazing.

LEO: It’s cold and rainy here…
TD: I don’t know what’s happening here, but it’s probably 70 degrees, sunny, I’m sitting on my porch drinking a beer, and loving every minute of it.

LEO: What do you think it is about Athens that makes the music scene there so prolific?
TD: That’s a good question, man. I suppose starting somewhere in the ’80s, something was sort of stirring here that attracted people, and it started growing. Something about it brings like-minded, very creative people to this little southern college town. I suppose that the college town has something to do with it, too. You know when high school kids are thinkin’ about where they’re going to go to school, and they think about places that would be interesting – Athens just has that extra bit of culture that a lot of other southern towns don’t have. It’s just a very rich collection of very interesting and very creative folks, and I guess that just spawns a whole lot of artists and musicians.

I’ve never lived anywhere, where I knew as many musicians. Everyone I know is in at least one band, if not three or four or five. I think because of that you can go out any night of the week and see a great band play. And when you’re in a band, it keeps you on your toes and cultivates this healthy competition, where you try to play a better show than your buddies just played. We just love being surrounded by such talented people, and the town is so small you can’t help but rub elbows with these people all the time.

LEO: One thing I’ve found interesting is that the Athens scene is so varied, there doesn’t seem to be a unified sound coming out. Why do you think that is?
TD: Yeah, there is a really great variety, I think. There’s a wide spectrum of music being played in a town where I feel like we’re all basically friends with each other. Even though The Whigs play this kind of rebel, raucous garage rock, we still have close friends that are in metal bands and electronic bands and hip-hop groups and country bands. And we all enjoy each other’s music a lot, and we enjoy going to each other’s shows. I think that’s great. I can’t say that I’ve seen that kind of interaction in other places; maybe that is something that’s unique to this town. We like to support each other. There’s a strong sense of community here, I think in some way and not in a pretentious way, but we’re all proud to be from Athens. Hopefully we can continue to cultivate that atmosphere, and add to the culture ourselves.

LEO: You all have been through Louisville a few times, what kind of response do you get from a Louisville crowd?
TD: We like Louisville. Forecastle (in July) was the last time we played there. That was a great time with a great line-up – unfortunately we couldn’t stick around. We were in the middle of recording this record when we came up to play that show. I don’t know if the Truckers played, but Jason Isbell was there, and a whole lot of other great bands were there. It was a shame we didn’t get to stay to watch anything else, we showed up, we played, and we had to get back in the van and drive home, so we could get back in the studio and finish tracking. But we had a great time. It was an awesome vibe out there by the water; all the kids were out; it was a lot of fun. We also have a lot of friends in Louisville so we like to come up and hang out whenever we get a chance; and we’re looking forward to coming up there again.

LEO: Do you have a favorite song on In the Dark?
TD: That’s a tricky one. You know, we’ve been working on this thing for so long, you kind of have relationships with these songs that change over time. I’m happy to say I’m excited about all of them; I’m excited about every single track on the record. I think we did a good job of writing enough material that only the best would make it onto the album. I think we wrote like 25 tunes, and recorded like 16, and then whittled it down to 11. But the song I’ve been enjoying the most lately is the last song on the record. It’s one of those songs that the record label didn’t even listen to, they weren’t that pumped about it, but we sort of made them let us put it on the record. The title of the track is “Naked”. That was one that was a jam, and we weren’t really sure where we were going with it, but we knew we wanted to track in the studio anyway. And it was one of those songs that just didn’t come together until the studio. Maybe that’s why it’s exciting for us to listen to, because we just weren’t sure what we were doing with that song, and it just kinda happened. I think (guitarist/singer) Parker (Gispert)’s work on that tune is my favorite, definitely my favorite lyrics by him that he’s written.

LEO: Do you write for the studio or the stage?
TD: We write for the stage, man. We can’t really help but think of the stage when we’re writing these tunes. I just think because we play so often, we really are a live band. We spend a majority of our time on stage playing – and even though we’re getting ready to go into the studio, when we’re actually writing songs, I think consciously or maybe even subconsciously, we’re just expecting them to be played in front of people. There are bands out there that get in the studio and that’s where they come up with ideas. We really enjoy that aspect, like “Naked” — that really did come out of the studio – but it’s one of the 25 songs that we came up with, so it’s not typical of how we usually think about things. As a live band, we started it to play in front of people, and that’s kind of how we look at things when we’re writing songs. It’s the nature of the band.

LEO: I heard you debuted a lot of the songs live before you recorded them, is that true?
TD: Up until that point, we had only played these songs in our rehearsal space, and maybe for some close friends, or your roommate or something. But you never know how these songs are going to do until you play them in front of an audience. So we played a benefit show for the Georgia Theater, which is a stellar music venue in Athens that burned down. We booked it under a fake name and played almost every song off the new record.

LEO: Did any of the songs change on account of being played in front of a crowd?
TD: Yes, absolutely. At that point a lot of the songs were in their embryonic stages, they were just babies. Some of them didn’t even have full lyrics, Parker just got up there and either mumbled or made up lyrics as he was going a long. And some of them just weren’t very good songs. You sort of realize while you’re playing, or by the look on people’s faces, whether the song has potential or not. And it sort of gave us insight … when you’re in a packed room, hooked up to the PA – it sounds different than being alone in your rehearsal space. And I think it gave a healthy perspective on what we did in the studio after that.