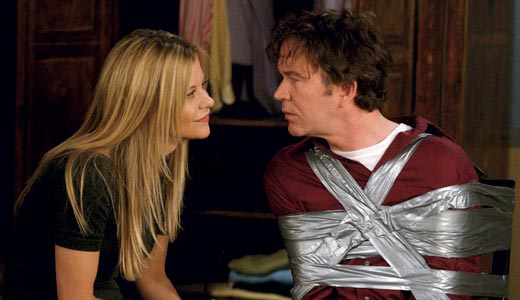 We’re not sure if this flick was ever released theatrically. We’re not sure if it’s even “good.” All we know is that it is one of the funniest — and occasionally ickiest — comedies we’ve ever seen. Meg Ryan is great as the stressed-out lawyer who “accidentally” duct-tapes hubby Timothy Hutton to a toilet after she discovers he’s been cheating with gorgeous Kristen Bell … and then burglars show up. Very twisted and unpredictable, with Justin Long as a befuddled thug.

The Coen Brothers, creators of such fare as “O Brother, Where Art Thou?” and “The Big Lebowski,” have made a few stinkers as well. (We hated “Burn After Reading.”) This one’s not a stinker, but it’s a bit less than universal in its appeal. Michael Stuhlbarg stars as a Jewish man in 1967 whose life falls apart after his wife unexpectedly leaves him. A black comedy exploring the ways that society has of enforcing its little rules to keep us “happy.” Or something like that.
•••

A masterful and violent crime drama from France about a pair of cops, both eyeing a now-open chief’s chair. While tracking a gang of armed robbers they each try to out-perform the other, becoming increasingly more ruthless and immoral, until the cops are a bigger threat to the populace — and each other — than the gang they are chasing.

While mesmerizing, this bio-drama is a savage stab at the same celebrity culture it revels in. Nineteen-year-old Michael Peterson got a seven-year sentence for robbing a post office, but ended up serving 34 years — nearly all of it in isolation — because of his unabashed lust for violence and mayhem. During that time, he changed his name to “Charles Bronson,” becoming a superstar anti-hero to a generation of tough guys throughout the world. Star Tom Hardy is amazing in this hard-to-categorize film.

BUSHIDO: THE CRUEL CODE OF THE SAMURAI

This is not a Samurai/martial-arts movie. Instead, it looks at the way the Bushido Code — the fanatical “Boss-follower” system — affected the families of its adherents over a period of seven generations, right into the present day. The message here is not Japanese but a universal one that condemns blind adherence to any political or social institution.

A quartet of couples go to a tropical island — one couple there for a “relationship camp,” the other three just tagging along. Unfortunately, the therapy and seminars are mandatory for everyone. Vince Vaughn, Jon Favreau, Jason Bateman and Faizon Love share their indignities with Kristen Bell, Kristin Davis, Malin Akerman, Kali Hawk and Tasha Smith. With lots of pee-pee gags and the general unpleasantness of hairy Frenchmen, it has its moments.

The famous 14th century poem by Dante Alighieri (proper title: “The Divine Comedy”) is now being released as a video game. This animated feature is a full-length movie version of the poem, using the game’s animation and other sources to tell the tale. Interesting as hell.

Even if you’re not a Shakespeare buff, this is a must-see. In 1953, Orson Welles (two years before “War of the Worlds”) starred in this live-TV broadcast featuring some of the world’s greatest actors, musicians and other talents. The logistics were staggering: The producers had to invent completely new techniques of broadcasting to accommodate the lavish production. The lessons learned echo today in the many fine offerings from the BBC on PBS — they literally owe their existence to this single broadcast. It is extraordinary.

A terrific little comedic indie love story … with demons. A young man, a loser who hates his job and is about to give up on life, meets a girl who brightens his day. Until she is kidnapped by monsters, leaving behind a mysterious ancient book. He uses the book to conjure his own monster to win her back from the pits of hell … unaware of the price. Nicely nutty and fun.

A pair of TV dramas from the master of the genre. First, in “The Arena,” a new senator must decide on a path: one laid out by his father, a former senator, or another that could lead to ruin. Then, in “The Strike,” a Korean War major is forced to issue an order that will deliberately sacrifice a score of his men.

Dylan “Nip/Tuck” Walsh, Sela Ward and Penn Badgley star in this straightforward remake of the 1987 cult-thriller classic that starred Terry O’Quinn. Walsh is a ruthless serial killer who plans to murder new squeeze Ward, son Badgley and girlfriend Amber Heard, just as he’d done in the past. No surprises, but fun.

The chickiest chick-flick ever made? It’s got our vote as Rachel McAdams spends her life falling in love with, and waiting for, Eric Bana, who has a habit of coming and going unexpectedly. Seems he suffers from a pesky condition: He spontaneously vanishes from one time, appearing in the past or future without warning or reason. Is it “a timeless love story” or “a guy who knows when to blow town”? Here’s how to decide: Stick a hand in your pants and make a fist. If there’s a penis in your palm, you’ll be bored.