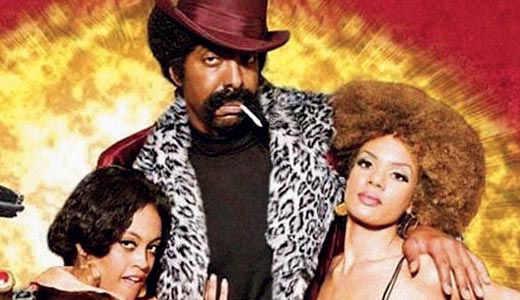 Michael Jai White leads an all-cool cast, baby, in this ’70s-style Blaxploitation action-spoof. He’s the titular super crime fighter. But when The Man goes too far and kills his brother, Black Dynamite goes into action to clean things up “all the way from the blood-soaked city streets to the hallowed halls of the Honky House!” Or, as BD says, “Watch out, you diabolical dick shrinkin’ mother fuckers!” With Salli Richardson-Whitfield, Tommy Davidson as “Cream Corn” and Arsenio Hall as “Tasty Freeze.”

Gerard Butler (whom we’ve seen waaay too much of lately) and Jamie Foxx star in this brain-dead actioner that is amazingly entertaining … considering how unbelievably stupid it is. After Butler’s family is killed by criminals, he blames Assistant D.A. Foxx and a corrupt legal system for letting the criminals escape justice. His vengeance takes the form of clever and elaborate revenge-killings — arranged from within his prison cell! — with Foxx the last on his list. The real star of this action thriller is the sfx department, responsible for staging the exciting, noisy and damn smart killings.

A serial killer is loose in the small town of Emeryville; one who carves the number 13 into his victim’s chest. Meanwhile, Sera is home alone; outside, a storm lashes the area. The doorbell rings. Should she let the Bible-quoting real estate agent in? With a delicious twist ending.

Cheap, straight-to-vid follow-up to the horrific flesh-eating-virus-plagued original. This one takes place at a high school prom where someone has tainted cute little Alexi Wasser’s bottled water.

A massive 19-disc set of 34 Warner Brothers films, plus a final disc containing an intimate short film on Eastwood’s life and career. Too many good titles and neat bonus stuff to relate here — hey, this is Clint Eastwood we’re talkin’ ’bout! — and a steal at under $4 a film!

Adorable little Audrey Tautou shines in this French-language biopic of Gabrielle Bonheur Chanel, who rose from being a penniless orphan seamstress to queen of a worldwide fashion empire.

If you don’t recognize this title, it is considered one of Brigitte Bardot’s most brazen efforts. Legendary filmmaker Fritz Lang cameos as himself, filming a German version of Homer’s “Odyssey” on Capri. Meanwhile, his asshole producer hires a writer whose marriage to Bardot is crumbling. The rest of the film is a travelogue of beautiful cities and beautifully decadent people, each passing Bardot’s gaze as she seeks to understand the men in her life.

A six-disc set from the PBS series. Includes “Can Animals Predict Disaster?,” “Encountering Sea Monsters,” “Oceans of Glass” about the Monterey Bay Aquarium, and two episodes on pandas. Hilary Swank narrates a pair of programs on Antarctica.

NOVA: WHAT ARE DREAMS?

A terrific NOVA science outing — as good as anything they’ve ever done as researchers try to answer the age-old questions of “What are they?,” “Why do we have them?” and “Do they have any meaning?”

Dumbass SciFi Channel dreck with aging babe Nicole Eggert and former “B.J. and the Bear” star Greg Evigan co-starring behind a rebuilt NASCAR car that’s infested with the hoary spirit of a driver that Evigan accidentally killed on the track 17 years earlier.

First Blu-Ray release of one of the greatest movies ever made: Akira Kurosawa’s much-imitated epic of greed and revenge. A great and powerful lord steps down, asking only that each of his three sons treat him as an honored guest in their castles. Two agree, but the third warns him that it is folly to expect the three to stay united once he is gone. For this truth, he is banished, and soon the old lord is stripped of his title and thrown from his own kingdom by the two evil sons. The banished son then takes up arms to restore the kingdom and his father’s honor.

Consider this cast: Kevin Nealon, Tom Arnold, Kip Pardue and Christopher Titus. What kind of movie would they make together? Hmm, that’s a toughie. How about this: A late-night TV host is about to lose his gig, and his wife is carrying on a less-that-discrete affair with a pro ball player. So he stages the wildest, most bizarre media stunt ever devised to set things right. It fails, but in the process, something truly unexpected happens. You tell us what kind of movie that is.

We LOVE these wordless kid-vid stop-action shorts! What’s this one about? Who cares! We’ve seen at least a dozen of them so far, and each one is gem. If you’ve got kids, buy this! If you ain’t got kids, buy two and give one to the kid next door. They are just that good.