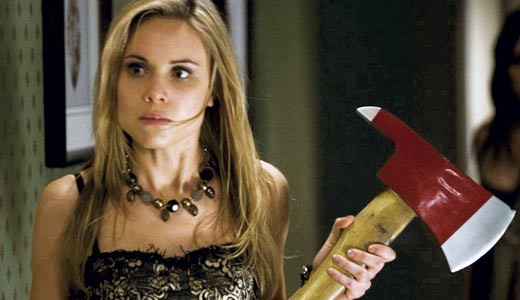 Cameron Diaz and James Marsden star in this padded-out Richard Matheson short, originally a “Twilight Zone” episode called “Button, Button.” A couple receive a box with a button and are told: “If you press it, you will receive money, but someone you don’t know will die.” Later, when they return the box with the button pushed, they ask the handler, “What happens to it now?” and he replies, “Oh, we give it to someone else … But not anyone you know.” The end. Frankly, there’s not enough story here to flesh out to 90 minutes.

A vagrant pulls a gun, politely asking for $1 for a cup of coffee. The victim says, “No, I’m feeling manipulated here,” so the vagrant shoots himself. All the characters are bored with life, despite having everything at their fingertips — except meaning. A bizarre, dark, clay-animated adult fairytale that takes a dig at our love of self-help books. Sorta. You’ll just have to see for yourself. Pretty amazing. Sorta.

John C. Reilly stars as a vampire at a spooky circus filled with real supernatural freaks. He recruits Chris Massoglia from the audience to join them and become his protégé. Based on a series of novels by Darren Shan. Read the books.

A doc on one of the largest and most controversial legal cases in history: the so-called “Amazon Chernobyl” case in which 30,000 rainforest dwellers sue Chevron Oil for $27 billion — with a b! — over loss of their culture, homes and livelihoods. Never heard of it, huh? That’s probably because the press in America is funded by advertisers, of which Chevron is a biggie. Recommended.

Host Mike Rowe is our hero — big, charming, good-looking, with a voice that makes you want to go out and buy stuff. But more importantly the guy’s got the greatest sense of humor on the planet and proves it each week by wading in and doing the most disgusting, nauseating jobs imaginable to showcase the value and dignity of ordinary people. Here he and his crew do a number of nautical naughties — and make it look fun.

In 1905, a Russian Jew came under the care of Dr. Carl Gustav Jung, and medical history was made. Jung nursed her to health using Freud’s methods, then seduced her. She was later killed by the Nazis. But this movie isn’t directly about that — it’s about a pair of modern-day scholars researching Jung and Spielrein, and getting swept away in the passion of the tale. Oddly enough, it stars Craig Ferguson and Caroline Ducey as the modern-day docs.

Better known on the SciFi Channel as just “Open Graves,” this Eliza Dushku supernatural Euro-thriller is a mixed bag. At its core is a cursed boardgame that causes players to die in icky ways. Of course the question everyone really wants to know is, “Does she show ’em?” Well, sort of. At the end there’s a scene where she crawls in from the surf, morphing insect-like along the way, and you get a nice view of her “naked” butt — or maybe it’s just a special effect. Welcome, but not worth the effort.

The welcome resurrection of one of sleazemeister Joe D’Amato’s best “lost” works. Laura Gemser, the “Black Emmanuelle,” stars in this wicked tale of an English soldier who brings her home to his estate, a “gift” from a tribal king. In his absence, his wife has been having a lesbian affair with her housekeeper (the immortal Annie Belle). The would-be slave seduces them all to create havoc in the house and maybe earn her freedom. A truly twisted and depraved film as only D’Amato could deliver. Enjoy.

From director Steven Soderbergh: Matt Damon in a film-festival favorite. He plays a former vice president, now the undercover star witness in a price-fixing trial against a massive agri-business. The funny part is that he’s such a complete and utter moron that he’s certain to screw up the investigation. Matt seems to be having fun, and some people call this the funniest movie ever made. Won’t go that far, but it has its moments.

Another big film-festival fave, this one a doc on Vogue magazine editor Anna Wintour — the woman who inspired “The Devil Wears Prada.” The September ’07 issue is coming up, the largest in the mag’s history, and it will guide the course of the multi-billion-dollar global fashion industry for the next year. And Wintour is clearly in charge. This woman is freakin’ scary. Surprisingly entertaining.