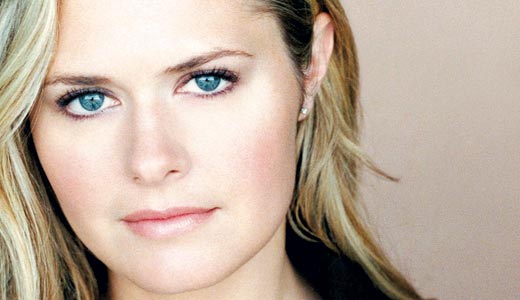 If one were to do a cursory Google search of Maggie Lawson, he would discover a litany of misinformation. Not least of which is the assertion that perhaps she and her “Psych” co-star James Roday are engaged.

“Nooooo! We’re not! We are happily dating,” Lawson says with a laugh. “We are definitely together, but no engagement. I think that’s so funny. See, that’s why you don’t Google yourself.”

Maggie Lawson: There were a lot of things that lined up in ways that were serendipitous. But one of the main reasons I came to L.A. when I did was because my brother found an article in a magazine that said they were looking for an Alicia Silverstone look-alike for a series. We were so naive, but it was just like, “Oh my gosh, I get it all the time that I look like her. We should drive out there!” It was long cast and probably on the air by the time we made it out there, but that was actually one of the reasons.

LEO: Do you feel like the fans of “Psych” are a sort of cult following?

ML: Definitely. I think it’s nice in that it’s a show that doesn’t take itself too seriously. It’s something that’s fun, and people can wrap their heads around it and enjoy it, and (it won’t) take them down any roads that are too complicated or too dark. The chemistry amongst the cast is something rare. It’s fun to watch, because we have such a good time doing it.

LEO: “Psych” often uses guest stars. Who would you like to see on the show?

ML: I would love to meet Barack Obama, so I would throw that in there — but probably not as an actor on the show. Oh, Tina Fey — she’s brilliant and really funny.

LEO: How would you use her?

ML: I think it would be funny if she were like a rival psychic to Shawn. Maybe a real psychic, and she and Shawn would have to figure each other out, or maybe she figures him out.

LEO: Does “The Mentalist” bother you? Do you guys see it and think, “Really? This is the exact same premise.”

ML: No, because we’ve gotten a lot out of it on the show. I don’t think anyone sees it that way. I think it’s a huge compliment that somebody wanted to create a show about a fake psychic-ish guy — again — I guess because we did so well. I don’t know. But I don’t think anyone watches it and thinks, “This is just like our show.” It’s such a different tone.

LEO: Are you starting to get recognized in public?

ML: Not really. I get asked if I’m Alicia Silverstone more than I get asked about myself. Some people put it together, because I look different on the show. Even when I’m with James (Roday) — and we always joke about it — they’re finally like, “Oh, are you Maggie?” And people always say, “You look so much taller on TV.” I don’t know if I should take that as a compliment or not.

LEO: Do you have plans for life after “Psych”?

ML: At this point, no. I hope it’s something we don’t have to think about for a while. I love doing comedy, I would love to get into film a little more, I’d love to do plays again. I don’t know. I don’t want to think about it yet.

LEO: What do you miss about Louisville?

ML: I miss the ease of a place that doesn’t have disastrous traffic. It’s weird to think of Louisville as the South, because it’s not really the South, but it has that slower pace, and I do love that. It takes me a couple days when I’m in Louisville to be like, “Oh, I can chill and relax and breathe.” You don’t have to go, go, go all the time. When someone asks me about growing up there, I tell them that it’s one of those cities that has a little bit of everything, and the little bit we have is really, really good.