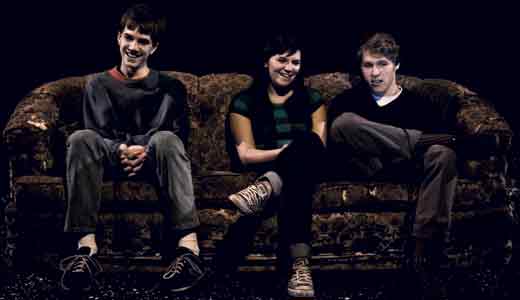 Andy Fleischer knows how to die. Last spring it was a gunshot to the back, and this week it’ll be cyanide — much slower, more painful and gruesome. But unlike last year’s character in Shakespeare’s “Coriolanus,” Fleischer’s current character isn’t fictional. The 17-year-old Youth Performing Arts School and Walden student plays a teenage boy named Ben who was murdered by his best friend Ryan in 2003. The play, “When In Disgrace (Haply I Think on Thee)” by Damon Krometis, blends modernism with classic melodrama to convey a true story of jealously, betrayal and violence.

“Once you know it’s true, it hits harder than if it was fiction,” says Fleischer. The play contains as many adult themes as it does coming-of-age elements, with painful truths about teenage anxiety, poorly researched depression medications and the frightening availability of hazardous substances via the Internet. It is not a children’s show, and it is an extreme example of an adolescent experience, but a lot of it is closer to these actors’ lives than most of their previous roles.

“They are so seldom called on to play realistic teenage characters,” says Walden instructor Alec Volz, who is directing the show. “In a way, it’s easier because I can keep saying to them in rehearsal, ‘You know this person. This person goes to your school.’ But then on the other hand, it’s not realism. It’s a melodramatic situation — granted, high school is melodramatic — and that’s where it works really well.”

Krometis’ play is a complex mixture of fantasy and reality — the names of the characters haven’t even been changed from the actual 2003 event (in which a teenager spiked a friend’s Vanilla Coke with cyanide he ordered from Louisville-based chemical company Antec Inc.), but the story is presented as a modern Shakespearean tragedy. The entire script scans out in perfect iambic pentameter, so the actors were required to memorize not only their lines, but train themselves to stress every other syllable, careful not to break the specific rhythm and flow of the scenes. This is something these kids are used to doing, though — Walden devotes an entire semester to Shakespeare every year, and the students become immersed in it often before they reach high school. Fleischer has already lost count of how many Shakespearean shows he’s done in his six years at Walden.

“We have a common vocabulary with them, and they’re not afraid of it,” says Volz. “And this is the same thing, but the language isn’t 500 years old. It’s still formalized, ritualized language. It’s heightened in a modern way.”

Both Fleischer and Nicole Priest, two of the play’s main characters, say that while their sophisticated training is helpful, channeling into a modern script has proven challenging.

“It’s really hard sometimes,” says Priest, who plays Ben and Ryan’s friend Caroline. “Alec’s always telling us, ‘You’re messing up the meter!’ And I have some lines in this play that are just so hard to say and so awkward, like ‘excess testosterone.’” This has been Priest’s biggest role so far, and she says she’s learned more playing this character than all of her others combined.

“We’re working toward starting a whole series of brand-new works, with teenage characters in mind, where they’re dealing with real subject matter and they’re realistically portrayed,” Volz says. He feels that the students having the opportunity to play realistic teenagers is useful training for them on top of the classic genres and styles they’re used to.

Walden’s production of “When in Disgrace” is only the second after the play’s premiere in New York last winter, making this the regional debut. There will be a reception and discussion after Saturday’s matinee, featuring the Krometis, Volz and the cast.