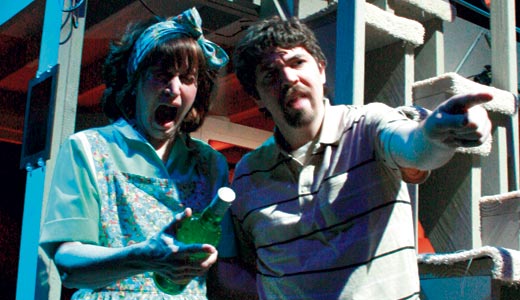 Noises Off
Presented by Louisville Repertory Company. Directed by Kathi E.B. Ellis. Continues through Feb. 21 at the Kentucky Center’s MeX Theater. For tickets or more information, call 584-7777 or visit www.lourep.org.

Louisville Repertory Company continues its season with David Frayn’s hilarious “Noises Off.” Ranging from classic to contemporary, comedy to tragedy, this company continues to prove they can do it all.

“Noises Off” is a farce about a cast in a production of the fictional play “Nothing On.” Each act of “Noises Off” has the cast trying desperately to get through the first act of the show — with on and offstage points of view. The first act, set during a final dress rehearsal, has the actors straying from the play, asking arbitrary questions, completely unaware of the seriousness of the impending opening night. The second act focuses mostly on backstage jealousies and anger. By the third act, it’s every man for himself. During the production, the backstage shenanigans affect the onstage production until what’s left is complete chaos.

Chaos, when done well, takes timing and precision, and thanks to Kathi E.B. Ellis’ direction, this play’s got it. It takes a while for the play to warm up — the opening is a bit slow, but once the premise is established, the momentum continues to pick up until the end. Under Ellis’ direction, the ensemble hums.

Traditionally, “Noises Off” is performed on the set of the fictional show for the first act and then backstage for the second. Because of Brian Shaw’s set, however, the audience gets to see both sides for the entire show, opening up the possibilities for many more laughs. Shaw sets up a basic frame with hollow doors and walls so the stage, every inch of the set, can be seen from any seat in the house. John Newman’s lights clearly separate the two sets — a cool blue wash for the backstage, and warm lights for the front.

The cast creates nuanced moments that inform each of their characters, starting from the beginning while preparing for the final rehearsal and then opening night. These detailed performances add to the overall production.

Though Frayn’s play is funny throughout, the reason to see this production is the second act. The choreography is astounding. The ups and downs, onstage and off, violence and fainting, and ongoing frustration with each other thrust insanity into every moment. Between laughs, I sat flabbergasted, thinking about how they managed to get the timing just right. But they do.

“Noises Off” won’t solve the energy crisis or help you discover the yearnings of your soul. In essence, as one character says, it is merely a play “about doors and sardines.” But all those doors and sardines (and the chaos surrounding them) will most definitely make you laugh.