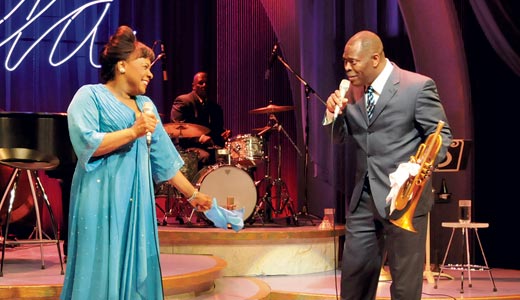 The lights go down, the drumbeat starts and the show begins. And boy does it. Tina Fabrique mesmerizes the audience from beginning to end as Ella Fitzgerald.

Conceived by Dyke Garrison and Rob Ruggiero, “Ella” tells the life of the great jazz singer Ella Fitzgerald. Based on a book written by Jeffrey Hatcher and musical arrangements by Danny Holgate, the story is both entertaining and intriguing. During a soundcheck for a concert, Ella goes through the story of her extraordinary life, interspersed with such songs as “That Old Black Magic,” “You Can’t Take That Away From Me” and, of course, “A-Tisket A-Tasket.” With the audience as her confidant, she opens up about her difficult life on the road to becoming the First Lady of Song. All this is prep for the second act, which is the concert, and the audience is … well, the audience.

Fabrique plays Ella effortlessly, carrying the performance. For all intents and purposes, this is a one-woman show, and this isn’t an easy woman to play. The voice alone seems unattainable, and yet Fabrique handles it with ease. She doesn’t do an impression as much as embodies Ella herself — capturing her voice, her personality, her singsong speech and her mannerisms. Ella Fitzgerald was famous for her phrasing and intonation, and especially her horn-like improvisational ability of scat singing, which Fabrique captures perfectly.

The band consists of George Caldwell on piano, Rodney Harper on drums, Ron Haynes on trumpet, and Clifton Kellem playing bass. They fill in as voices from Ella’s past, but it is all about the music. The solos and jazz riffs astound, only to be topped by Haynes’ great Louis Armstrong impersonation. And Harold Dixon plays Norman Granz, the agent. It’s a somewhat thankless role, with show-stopping numbers running throughout, but he holds his own for the little stage time he has.

Ruggiero’s direction maintains that the stories are being told through the experience of a performer on a stage. Ella says many times that she feels more comfortable singing than doing just about anything else, which is why with Ruggiero’s direction and Fabrique’s performance, the songs aren’t breaks in the story but rather further insight into this woman’s life.

No matter how many CDs and recordings you may have, they never compare to a live show. What was it like to see the First Lady of Song perform just a few feet away? What was it like to feel the music, to feel every note as it was being played, and to hear that voice fill the space? Actors Theatre’s “Ella” gives you the opportunity to find out.