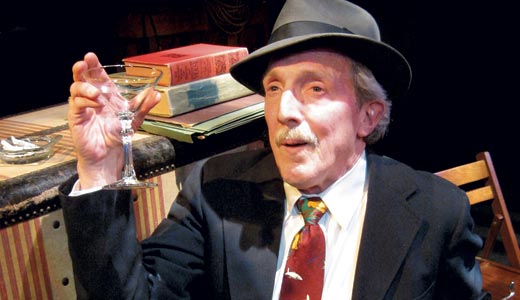 Barrymore
A production by the Bunbury Theatre Co. Directed by Steve Woodring. Continues through Feb. 14 at the Henry Clay Building, 604 S. Third St. For information and tickets, go to www.bunburytheatre.com or call 585-5306.

In 1920, when John Barrymore appeared on Broadway in his first Shakespearean role, Richard III, New York Times critic Alexander Woolcott wrote that the audience “stood at the end to cheer incontinently as the curtain rose and fell” in tribute to Barrymore’s “technical fluency,” “winged imagination” and “real genius for the theater.”

It was the high point in the career of one of America’s greatest actors. A month later, Barrymore was reported ill with the “grip” (but not, according to the report, with the influenza that was then in the last stages of the 1918 pandemic).

A few days later, it was reported that Barrymore had suffered a “nervous breakdown” and that “Richard III” was being suspended until the fall.

It wasn’t the end of Barrymore’s career. He would go on to play Hamlet a couple of years later, and in Hollywood he had a run of cinematic successes that can still be tracked on Turner Classic Movies or in YouTube clips. But it was a harbinger. Over the coming years, his bouts with alcoholism (including, it seems, ingestion of poisonous bathtub gins during Prohibition) robbed him of memory to the point where he needed cue cards and prompters for even the shortest of speeches.

William Luce’s two-person play, “Barrymore,” which opened last week in a Bunbury Theatre production directed by Steve Woodring, portrays Barrymore (Matt Orme), not long before his death in 1942, trying to stage a comeback performance as Richard — because after a wasted career, he craves to be taken seriously just one more time.

Barrymore has rented a theater. He’s hired a prompter (Ted Lesley) to run his lines. And on Keith Kimmel’s set, delightfully cluttered with props, wardrobe trucks and other theatrical detritus, he tries his lines.

But this is a Barrymore who can’t remember even the first words of “Now is the winter of our discontent” without multiple prompts, let alone the entire speech. And nearly every clause in the soliloquy sends him spiraling into anecdotes about family, acting, wives and drink. It’s a premise that serves well for a theatrical memoir, and Orme brings a kind of virtuosity to the role. He gambols about the stage on the balls of his feet, singing “(I’ve Got a Gal in) Kalamazoo,” in a deep, resonant baritone. He displays an extraordinary gift for mimicry in stories that bring to life some of the classic voices of American actors. He brings impeccable timing and undeniable glee to a rich array of ribald jokes. And when the petulant prompter — who has volunteered to help him rehearse because he hopes to hear the once-great actor return to form — finally shocks Barrymore out of his reveries, Orme delivers a fine, thoughtful version of Hamlet’s great soliloquy.

And yet, Orme’s portrayal seems too amiable. He plays Barrymore as an avuncular, easygoing chap who’s mostly interested in looking back on his glory days through a cheery alcoholic haze. If through his drunken memories, libels and dreams Barrymore hears the dogs of mortality barking at the wasted deformity of his career, Orme doesn’t dwell on it. If Barrymore’s “conscience hath a thousand several tongues, and every tongue brings in a different tale,” none of those tales is fraught with condemnation — Orme’s is a likable Barrymore — one that only for a brief moment strays into the realm of grief and despair.