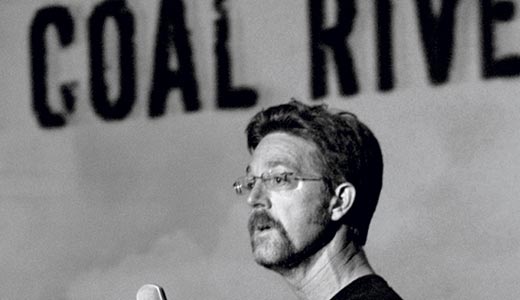 Though we have a new mountainous structure shoved against the Second Street Bridge, snowy peaks aren’t part of our skyline, and we’re not likely to run into any miners on the TARC bus. However, you’re likely to spot “Topless Mountains are Obscene” bumper stickers on cars throughout the city these days, and the group Kentuckians for the Commonwealth can frequently be found at community events as Louisvillians become more aware of mountaintop removal mining. This week, just in time for I Love Mountains Day in Frankfort, the matter takes the stage with the premiere of “Welcome to the Saudi Arabia of Coal,” an original multimedia play presented by the Coal Free Future Project.

Rather than taking an environmental approach, the play, by award-winning journalist and historian Jeff Biggers, gets personal — it places more emphasis on the effects that mountaintop mining has on the people living in coal towns. Based on Biggers’ book, “Reckoning at Eagle Creek: The Secret Legacy of Coal in the Heartland,” the show takes stories from the frontlines of these towns and places them in an edifying but artistic context, hoping to reach a wider audience. “There are a lot of great books and documentary films,” Biggers says. “But we felt we needed a creative endeavor.”

This production is the first of its kind and is set to tour the country after its national premiere in Louisville. Biggers considers our city to be a progressive place that is rapidly becoming connected to the issue, making it the perfect place for the launch. “What we are really trying to do is bring the human stories from an issue that gets so bogged down in statistics,” he says. “It’s so important to tell people that there are American citizens who have these incredible narratives that they need to tell.”

The show includes satirical coal-oriented commercials as well as historical information and photographs projected on the screen behind the actors (hence the multimedia part — what’s up visual learners?). And while the show addresses a serious topic, it contains a level of levity and humor. The play seeks to be provocative and inspire people to take action, while working to debunk the myths of coal companies.

“We’re really trying to make a bold statement,” Biggers explains. “We need to reframe the terms of the debate — it’s time to commit to a coal-free future.”

Both Biggers and Stephanie Pistello, the director of the show as well as National Field Coordinator for Appalachian Voices, are grandchildren of coal miners who both suffered black lung, so they have a firsthand understanding of a coalfield experience.

“I don’t think you’ll find any director who is so acclaimed in the field of theater and so involved with mountaintop removal,” Biggers says of Pistello. “She bridges art with activism and something that’s really personal to her.”

Pistello plays one of the main characters in the show alongside Ben Evans, a Louisville actor, filmmaker and co-founder of YERT (Your Environmental Road Trip), a documentary project on sustainability across the nation. Evans and Pistello play a young couple whose home in a holler of Eagle Creek is threatened by mountaintop mining.

“Our hope is that you’re not just watching a tragedy unfold,” says Biggers, “but an incredible history of people who have been resilient and stood their ground. It is a story about triumph as it is about tragedy.”

Be sure to arrive early — the MeX is cozy and intimate, which means seating is limited. KFTC and the Sierra Club will also provide information at the event.