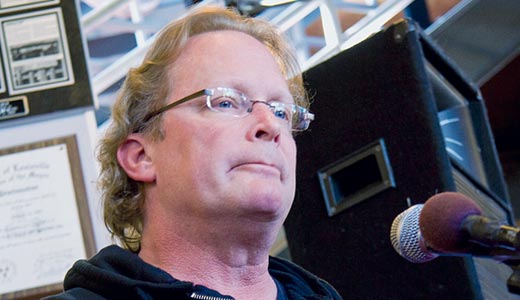 This is the first week of the rest of John Timmons’ life.

After sounding the alarm Friday for customers to keep his 24-year-old record store in business, the owner of ear X-tacy had mixed emotions about the challenging times his store is facing. “If the public wants it to be here, they should support it,” Timmons said during a press conference inside his nationally renowned record store.

The Louisville business is struggling and has been for several years due to lagging sales in this age of digital downloads, but the immediate problem is the fact that ear X-tacy’s pricey lease expires March 31. Worpla LLC owns the property at 1534 Bardstown Road, and their representatives were in the audience as Timmons spoke to the crowd of reporters, customers and local musicians gathered inside the Highlands store. At this time, Timmons says they are negotiating and there is the possibility of a deal to keep the store open at its current location. The outcome could involve a month-to-month lease or possibly downsizing to use only a portion of the space. Store manager Rebecca Cornwell says the store could lower its square footage without losing any inventory. Relocating to a new site is a distant option because it would likely reduce foot traffic.

All last week, lifelong customers rallied in support of the independent record store. A Facebook page called “Save ear X-tacy” started by a UK student exploded, now touting about 26,000 members. Last Tuesday, when Timmons first leaked word to the public that his business was in trouble, the store experienced its first significant sales bump since Christmas Eve.

Aside from the broader strategy of making more money to keep the business afloat, Timmons is asking for suggestions on how ear X-tacy can improve on its business model in the long run. At the news conference, Jim James of My Morning Jacket suggested that Timmons possibly change the store into more of a multi-purpose community destination. “People can’t even afford health insurance,” said James, whose band recorded part of its Celebracion De La Ciudad Natal album at the store in June 2008.

Promoter Rebecca Kessler suggested ear X-tacy consider changing to a nonprofit, saying, “They could legally accept donations.” Film producer Gill Holland, owner of sonaBLAST Records and The Green Building, said the store “does enough educational and outreach work to warrant a 501(c) 3,” adding that it could possibly be converted to a combined retail outlet and music venue.

Given the grim outlook for record stores nationwide, Timmons is going to need all the help he can get. In its piece, “The Lost Decade In Music,” CNN Money cited a new Forrester Research study that found less than half of all Internet users think music is worth paying for these days. Between 1999, when Napster launched, and 2003, when Apple rolled out iTunes, experts say the music industry lost valuable ground in creating an alternative to piracy.

Craig Rich leases the space for his record store, Underground Sounds, on Highland Avenue. The shop has lost 40 percent of its business in the last five years, and there’s little doubt piracy is the culprit, making the current recession that much worse.

“We’re never going to see the sales we had in the 90s or even the early millennium,” said Rich. “I feel for John. There’s not much profit.”

Sadly, one bright spot on the sales end seems to be the deaths of musicians. Sales jumped after the deaths of experimental folk singer Jack Rose on Dec. 9, Teddy Pendergrass on Jan. 13, and especially Michael Jackson last June.

But Rich contends record companies are exercising poor decisions when deciding what albums to reissue. The Rolling Stones’ 1972 album Exile On Main Street, which Rolling Stone Magazine called the seventh best album of all time, has been out of print for two years. “They’ll go through and start taking things out of print instead of doing their research,” Rich said. “You would’ve never seen that in the ’70s.”

Jeff Mueller, of the local band Shipping News, said customers should shoulder part of the responsibility to keep the industry going.

“At some point, the consumer has to own up and become a participant in the health of the culture it buys in to,” said Mueller, who owns a printing business in Chicago. Two of his bandmates work at ear X-tacy. “It’s not really a matter of Napster, it’s more a matter of what a music listener finds it necessary to pay for.

“Clearly, regardless of any regulations that may or may not be in place, when Napster came under attack by whomever, it didn’t stop anything. A record may very well be downloaded thousands of times in the weeks prior to its actual release. All it takes is one digital file to make it so. This will obviously affect sales potential, which in turn has an immediate affect on the artist, the label, the record store and ultimately the health of the culture.”

When asked whether the coalition has a long-term plan for dealing with reduced business in the digital age, Timmons said it’s to keep stores “viable and relevant.” The group launched Think Indie last year, and each member store has both a site for their physical products and a digital site, but Timmons estimated that it costs hundreds of thousands of dollars to keep it up and running. Every coalition store is feeling the pinch. For example, Dayton, Ohio’s last independent record store, the iconic Gem City Records, owned by an Atlanta company, shut down late last year.

Here in Louisville, the bleak news about ear X-tacy is affecting the morale of other local businesses. Both Timmons and store manager Rebecca Cornwell are on the board of the Louisville Independent Business Association. Members of this marketing group pay $100 in annual dues and, among other perks, receive an advertising discount in this magazine. Given ear X-tacy’s longstanding status as a beloved local business, it seems fitting that the store’s typewriter font logo is used in LIBA’s well-known logo, “Keep Louisville Weird.”

“ear X-tacy influenced me to start a business,” says Todd Brashear, owner of Wild & Woolly Video. “To me they’re like the cornerstone independent institution.”

The film industry is no stranger to piracy, Brashear said, which is why he strives to keep it interesting in terms of what he’ll carry versus big box stores and online retailers.

“We’re all fighting similar battles,” he said. “People do a lot illegal downloading of movies, but one good thing for me personally is that people don’t want to just download one scene from a movie.”