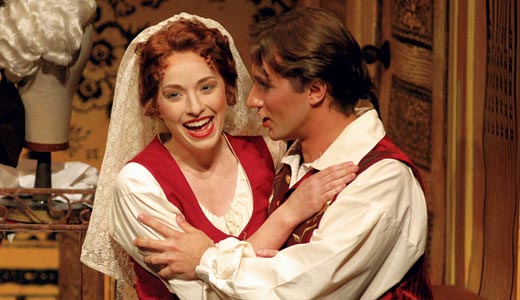 Bands like Tortoise not only seldom come around, they seldom stay around. Their at-times-sculpted/at-times-improvisational methods feel unique, not derivations of a current fix. SPIN called their 1996 classic, Millions Now Living Will Never Die, one of the top 10 essential progressive rock albums. Their latest, Beacons of Ancestorship, has led to fruitful collaborations with Wire’s Colin Newman. These veterans join forces with Chicagoans Disappears, whose repetition of reverb-delay-distortion, already debuted last year in Kentucky at Lexington’s Boomslang Festival, arrives closer to our grid. —Mat Herron

Six new works and a remount of a play performed last year will be produced in Walden Theatre’s 2010 Young Playwrights Festival. Every year, the talented writers in Walden’s playwriting class get the chance to fully produce their own works. With the help of Walden directors and fellow students, the writers get to see their plays come to life. The program, established in 1982, was the first of its kind in the country and has already accomplished a great deal. Over the years, Walden has produced six published scripts and has been a part of both the Edinburgh Festival Fringe and the Humana Festival of New American Plays. —Laura Morton

I remember finding some terrible soft-core porn mixed in with the normal stuff years ago at the Video Vault at the tender age of 13. It was over in “drama,” and the movie was about a man who invents a time machine and uses it to go back in time to have sex with famous historical figures. This event, ladies and gentlemen, is along those same lines (minus the sex, of course). Just like an aroused and perverted genius with a time machine, you will travel back to the age of burlesque for this alternately titillating and shocking stage show. Dangerous rockabilly babes (some of them Suicide Girls) will swallow swords, twirl tassels and eat glass alongside mustachioed sideshow-act master Donny Vomit, whose antics include mysterious names like blade box, mental floss and human blockhead. Bring your protective gear and money for booze. You’ll need the courage to remain close by when Mr. Vomit starts juggling chainsaws. —Pawl Schwartz

Punk-metal riffage and art collide Friday with a combo CD and magazine release. In one corner, The Revenants trot out their mix of Misfits-inspired metal on their new CD, Witness the Reckoning. In the other is the release of Dirt Merchant No. 4, a magazine founded by Brent Webb. “It’s dedicated to the end times, as Brent would say,” says painter and Evergreen vocalist William David Pollard. Pollard designed a logo and manipulated photos of the Louisville Illuminati, a group of oddballs who digest videogames and metal. “They are some odd cats,” Pollard says. Stonecutters headline. —Mat Herron

An all-star team of Kentucky poets will be at Carmichael’s Saturday to share their contributions to the new collection “What Comes Down to Us.” University Press of Kentucky compiled poems from more than two dozen contributors for what’s not so much a temperature check as it is a full body scan of the commonwealth’s contribution to the state of the art. When you take home the book, you’ll have the entire contemporary range from Wendell Berry to Frank X. Walker. But the late-afternoon reading offers an up-close and personal opportunity to hear from two former Poet Laureates, along with the couple who founded Sarabande Books, plus collection editor Jeff Worley (whose biographical essays and discussions of craft serve as crown and complement to the many stellar voices on the page). —T.E. Lyons

Remember that iconic WWII photo of the sailor making out with that lady in Times Square? Well, if you wanna recreate that little slice of history — and get your fox-trot on as well — it more than behooves you to spend a few bones and attend the Frazier Museum’s 1940 USO-style dance. Music will be provided by the 17-member-strong Don Krekel Orchestra, whose swing and big-band stylings should be the perfect accompaniment to any Rosie the Riveter fetishists in attendance. Special events include “best dressed” and kinesthetic swing dance competitions, so dust off your grandpa’s paratrooper uniform and do your part to redefeat the Nazis and contribute to the next Baby Boom. —Jonathan Meador

In 2007, U of L’s Michael Ramach embarked on an ambitious, cross-continental production of Mozart’s “The Marriage of Figaro.” The cast and orchestra included Louisville students as well as members of the Szymanowski Academy of Music in Katowice, Poland. Ramach looked to webcams and voice-over Internet protocol to help bridge the gap during rehearsals, and collapsible sets were designed to be more easily whisked through our local UPS hub. Cameras rolled as the two-city opera overcame cultural barriers and a tandem of conductors who didn’t always see eye-to-eye. The result is Dan Shaefer’s “Figaro.” Noting a lack of behind-the-scenes coverage in this performance-focused genre, producer/director Shaefer says he was motivated to show the building of an opera from the ground up. The 1 hour, 50 minute documentary will premiere Saturday at U of L. —J. Christian Walsh

Pandora Productions has outdone itself this year with its annual “Mardi Gras Extravaganza” benefit party for the local theater company. Partygoers will be treated to an evening of dance, art and drag entertainment — not to mention an open bar (holla!) and a photo booth (say cheese!). DJ Fierce Tease will be spinning tunes while Lady Bunny of NYC entertains with her comedy and music. There will be a silent auction of ceramic masks designed by local artists as well as props and set pieces from past shows. Sounds like a good way to escape the Valentine’s Day blues. —Sara Havens

The ’80s were a crucial time for the LGBT community throughout the country, but what was going on in Louisville? Well, in 1981, there were three small LGBT groups, and by 1990, there were more than 20. In 1989, the Louisville community steered passage of an ordinance through the Board of Aldermen that prohibited discrimination against people with AIDS. In 1990, the city passed the first hate-crimes ordinance covering sexual orientation. The local LGBT community of the ’80s laid the groundwork for what has come since, including the formation of the Fairness Campaign in 1991. Moderator Cate Fosl of the Anne Braden Institute will lead a discussion that includes the Rev. Dee Dale, Sam Dorr, David Williams, Elizabeth Stith, Jennifer Day, Ricky Miller and Carol Enoch. Others are encouraged to tell their own stories and share mementos of the time. —Sara Havens

Perversion plays only a supporting role in Slovaj Zizek’s psychoanalytic dissection of film (or “feel-em” as he pronounces it — perhaps that’s indicative of the title in some way). The Slovenian philosopher applies Freud and Lacan to memorable screen moments and arrives at rather profound explanations of why we connect to those scenes the way we do. If you’ve ever wondered why Hitchcock suspends so many characters out of windows, or are curious about David Lynch’s routinely creepy representation of parental authority, you’d likely benefit from Tuesday night’s screening. Director Sophie Fiennes seamlessly morphs Zizek’s lectures into a marvelous clip collection, which spans the work of Chaplin, Coppola and “The Matrix” to name a few. Fiennes cleverly inserts Zizek into many scenes by returning to actual film locations and mimicking the art direction, lighting design and aspect ratios of the movies being discussed. Note: This film has a two-and-a-half-hour running time. —J. Christian Walsh

I have always been a sucker for reworked art. The more iconic, the better. They draw you in with the familiar and inflame with the “How dare they!” Boris Zakic is a deeply methodical and intelligent artist. His current exhibition at Galerie Hertz features works from two previous shows that invite close examination, for they are not what they seem. At first glance, his interpretation of a portrait by the painter Bronzino looks solid and fully-fashioned. Yet parts are in flux, as if melting away.

Zakic’s explanation, in part: “(He) can never be present, only be repeatedly represented as not being fully present … At the heart, however, the oval paintings are terribly personal. There is no irony, no pun, nor any provocative intent. Actually, these are anything but.” —Jo Anne Triplett