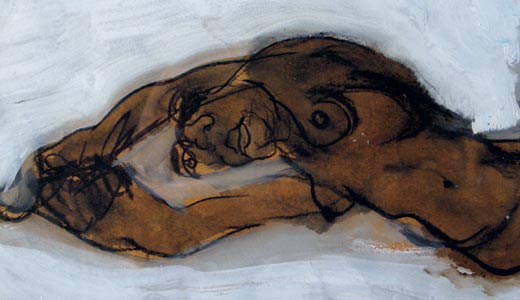 Art by Daniel Pfalzgraf, now on display at Art 227

South African-born artist Emil Walton doesn’t consider himself a gallery owner, he just came upon this space in St. Matthews by way of his in-laws. “No Holds Barred,” the first exhibit at Art 227, features Walton and a handful of other local artists including Joy Wilson, Daniel Pfalzgraf, Jill Morgan, Andy Cook and Shandy Goodlet to name a few. “I’m not to sure what to expect, but my plan is to have numerous group shows for the next few months to give artists like myself a place to show their art,” he says. “If people come to see the shows, then I consider it a success. Every artist wants their art to be seen and talked about. If they make a sale, then it will be icing on the cake.” The closing reception is Friday from 6-11 p.m. —Sara Havens

Anyone who picks up The Ravenna Colt’s debut album looking for echoes of MMJ will get some of what they’re looking for — but also a lot more. This is the release show for Slight Spell, the debut disc for Johnny Quaid’s new venture. The Jacket co-founder and guitarist is in fine shape on the 8-track CD, with assistance from Carl Broemel on pedal steel, some drums by co-producer Kevin Ratterman, and Natalie Felker adding to the vocals, along with participation by Jim James. Quaid starts out by proving he can lead a team on the Wilco-paved highway of modern alt-country. But then “Now to Begin” starts out the latter half of the tracklist with an inspired statement of purpose. Quaid tears into this one with beautiful control of stirring dynamics — and the goods just get better from that high point. Roman Candle is also on the bill. —T.E. Lyons

A high lonesome sound will once again reverberate from Shepherdsville when the inaugural Salt River Bluegrass Festival launches this weekend. The talent is remarkably first-rate for this first-time event. Performers include regional favorites such as Tony Holt and the Wildwood Valley Boys, Kings Highway, Bluegrass 101, Tommy Brown and the County Line Grass, as well as the internationally acclaimed family act Cherryholmes. Camping is available on-site, and hotel accommodations are available adjacent to the center. So pack the car and bring the kids. Flat-picking, buck-dancing and other forms of good, clean family fun await. Children 12 and under get in free. —Kevin M. Wilson

One of the longest-running plays in Off-Broadway history, Charles Busch’s “Vampire Lesbians of Sodom,” debuted at the Provincetown Playhouse in 1985 and ran for five years. The twisted folks at the Alley Theater and Art Sanctuary are pumping new blood into the production, which follows the bitter 2,000-year rivalry between two vampiresses/actresses who cross paths in the 1920s silent movie era. Also coupled with “Vampire Lesbians” is the play “Sleeping Beauty (Coma),” which places the fairytale in a swinging mod London in the ’60s. Instead of a poisoned apple that puts the title character to sleep, it’s LSD slipped into a cocktail. And who ever said the arts are boring? —Sara Havens

On Saturday, the kids bring the rock to the University of Louisville Student Activities Center. The third Rockin’ for Kids event benefits the Kosair Children’s Hospital Foundation — specifically the hospital’s music therapy program, which brings music to sick youngsters. The afternoon show will feature a collection of young locals including guitarist Matthew Pinkham, who briefly shared a stage with Keith Urban last summer, and blues-rock outfit Two Til Midnight, which will play a number of original songs written by drummer and cancer survivor Sean Banks. Another act to take note of is N’Style, an all-girl R&B combo currently working with Bernadette Cooper, a noted producer, writer and founder of the group Klymaxx, which had a string of hits in the 1980s. The event also includes inflatables, face painting, a Guitar Hero contest, fastest-drummer contest and a silent auction. —Kevin Gibson

A college chum suggested they ought to be in pictures, and now they are. The music of Indianapolis rockers Ladymoon will be featured in the upcoming film “My Bloody Wedding,” which premiers at the Derby City Film Festival on Saturday. An afterparty, featuring a set by the band, is planned for 9 p.m. the same night at Headliners. Beta Male, also on the soundtrack, will open.

The film, a can’t-miss in that it features both a flesh-eating bride and a robot, was put together by Morgan Mead, who knew Ladymoon’s Ryan Brown from their days at Ball State University. “He told me he needed a few rock songs,” Brown says, noting that three tunes were selected for the film. “It’s exciting. Especially since he’s gotten such a great response (on his previous work).” The band also is promoting its latest album, Resurface. —David A. Mann

Maybe film can bridge chasms that decades of discourse have failed to traverse. Take the recent screening of “Ajami” in Tel Aviv, where both sides of an Israeli-Palestinian audience reportedly wept openly for the on-screen woes of their rivals. The film’s ability to reach across sects can be attributed in part to its creators, a Jewish and Arab filmmaking duo. Scandar Copti and Yaron Shani used first-time actors and an improvised script to bring urgency and authenticity to their work. The result is an Oscar nomination for Best Foreign Language Film, and what will surely be a highlight of the Louisville Jewish Film Festival. Now in its 12th season, the festival continues through Feb. 21. “Ajami” is showing Thursday night at 7 p.m. —J. Christian Walsh

The bourgeoisie liberal elitists who read this publication (yes, you) are no doubt familiar with the “fair trade” moniker. Although in recent years the term has become something of a prerequisite for guilt-free conspicuous consumption among the MSNBC-and-hemp set, those who remain blissfully cocooned in their Real American way of life — Snuggies, Freedom Fries and McCafe “lattes” — should take a trip to U of L Thursday for a primer in exploitation education. Gary Heine of Heine Brothers Coffee fame will give a lecture at Gheens Science Hall about the coffee industry and why it costs so much to make a damn good cup of joe, after which a screening of “Black Gold,” a documentary examining the plight of indentured Ethiopian coffee-slaves, will run at the Rauch Planetarium. The event is sponsored by the student environmental group GRASS (Group Recycling and Sustainable Solutions). Pro tip: Bring your own mug and leave the flavor crystals at home. —Jonathan Meador

Louisville has, for whatever odd reason, always had a thriving zombie scene. I’ve never really figured out what it is about this odd little city that lends itself to a zombie apocalypse, but almost everyone I know seems to be prepared for it, or at the very least, celebrate it during our annual zombie walk. Lucid Street Theatre is working with The Anatomy Collective for this unorthodox (even by horror standards) piece of theater taking place in our humble hometown music venue. Their intention is to utilize non-traditional spaces and performance mediums to draw the audience out of passivity and into action — both mentally and physically. With past performances including works such as “I haven’t checked my voicemail yet, but fuck you,” this theatrical exploration of one girl’s strange mutation just might be enough to wake us Louisville undead from our winter slumber. —Pawl Schwartz

In 1875, two women’s baseball teams — the “Blondes” and “Brunettes” — met in Springfield, Ill. That marked the first time female players got paid for baseball. The new exhibit at the Slugger Museum, titled “Linedrives and Lipstick: The Untold Story of Women’s Baseball,” explores the evolution of women and baseball — from way before the All-American Girl’s Professional Baseball League was formed in the ’40s (made popular in “A League of Their Own”) to current stars of female baseball teams. It includes memorabilia and artifacts as well as info cards and displays that show how women’s baseball morphed from a form of amusement into a respected sport — a 1931 soap advertisement asked, “What’s wrong with the world when girls just will be boys?” —Sara Havens

This is a mother-and-child reunion (thank you, Paul Simon). “Seasons of Painting” features the art of Janet Oesterly and her daughter Sarah, shown together for the first time. “There are several … symbols of my station in life,” says Sarah. “But there is not a symbol pointing to … the major guiding force in becoming who I am: my mother. It was also her work that first introduced me to the world of art; her paintings decorated our living room walls long before I realized what a painting was.”

“I’m interested in exploring the way things work together, whether it’s science, politics or art,” says Janet. “(The works in the show) are in different media and from different periods of my life, but the curiosity about the delicate detail surrounding us all remains.” —Jo Anne Triplett

Linear thinking is the rational, step-by-step process to achieve a goal. That’s the “thinking” part. Another definition focuses on the “linear” aspect of the phrase. Bette Levy and Melinda Snyder utilize both concepts in their two-person textile exhibition.

“Linear thinking is very much a guiding principle in (my) work,” says Levy. “(I) consider (my) creative output to be cumulative and sequential — each successive work is directly informed by the learning and understanding garnered from previous work.”

In complement to Levy’s embroidered and crocheted pieces are Snyder’s hand-dyed quilts. She’s experimenting with “mark marking.” In other words, line. Her abstract quilts can trace their linear, step-by-step past to that beloved genre of quilting called “crazy quilts.” —Jo Anne Triplett