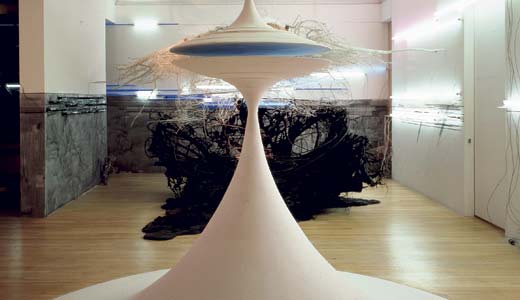 One of the biggest bands of the ‘90s, with countless awards and millions of albums sold, goes small ball this time around. Canadian pop-rockers Barenaked Ladies are hitting a string of intimate shows before kicking off a tour of larger venues later this spring. They stop by Hard Rock tonight for a special Happy Hour performance, playing material off of their new album, All in Good Time, as well as classics “If I Had $1,000,000” and “One Week.” Hang out, because the guys will be sticking around for a Q&A with the audience. —Brent Owen

Picking a rotten tomato at an IUS film festival can be tres difficile. Now in its 11th year, lineups have featured foreign language classics as well as recent international hits not widely known in the United States. This season opens on Thursday with “Ugetsu,” a treasure of Japanese cinema. For the uninitiated, Kenji Mizoguchi’s elegant, 1953 masterpiece sets the framework for a lot of what we see in today’s Japanese horror. Though not a horror film per se, the film’s ghosts, dreamy atmosphere and minimal, haunting score have left generations of viewers on edge. The festival continues with “The Grocer’s Son (Le Fils de L’épicier),” a heralded little picture from 2007. “As Far As My Feet Will Carry Me” (German, 2001) follows on Saturday, and “Wild Horses” runs the festival’s final leg on Sunday. A winner at Sundance in ‘96, the Argentine “Wild Horses” is one of its country’s best-attended films. —J. Christian Walsh

Everybody can use a laugh. It’s always in the worst times that we need some escape, and there’s no better escape than comedy. Good comedy, that is. And when a company that continues to do surprising, innovative and hilarious work creates a show about a dancing girl, a reclusive poet, a marine artist and a founding father adrift on a lifeboat, then you have yourself a classic … or at least a show worth checking out. Le Petomane, whether producing brand-new works or creating a fantastical twist on classics, keeps an audience on their toes. And, more importantly, they keep their work accessible. So take advantage of the sliding scale (they’re worth the most you can give, by the way), and see something original with a twist of comedy. —Laura Morton

The Kentucky School of Art has an ambitious visiting artist program — this time they’re bringing Judy Pfaff to town. Pfaff specializes in sculpture and installations. Armed with an MFA from Yale University, she is now labeled as one of the pioneers of installation art in the 1970s. Her site-specific work is made from such media as fiberglass, found objects and steel.

Pfaff has won many awards, including the MacArthur Foundation Award as well as fellowships from the National Endowment for the Arts and the Guggenheim Memorial Foundation. She is also co-chair of Bard College’s art department at Annandale-on-Hudson, New York. Best of all, Pfaff’s talk is free. A reception follows. —Jo Anne Triplett

I’m one of those good ol’ Celtic mutts you find around here, so I’m eagerly awaiting the chance to see Louisville Ballet’s “Celts.” One of the ballets in “Three Reflections,” it combines music and dance to create what the Ballet describes as Lila York’s “own effervescent ode to Ireland.” The program also includes a world premiere ballet by Amy Seiwert. Dance Magazine included Seiwert on its “25 to Watch” in 2005. So now it’s our turn to get to “watch” her choreography set to Mozart’s “Symphony No. 25.”

The third part of “Three Reflections” is the return of “Cold Virtues” by Adam Hougland. Danced to Phillip Glass’ “Concerto for Violin & Orchestra,” this was Hougland’s first commissioned work for the Ballet. —Jo Anne Triplett

In 1999, the South Yuba River Citizens League convinced California’s governor to designate 39 miles of the South Yuba River “wild and scenic,” depriving the local flora and fauna of a riverside Tumbleweed. A few years later, they decided to celebrate the victory by throwing a big party and watching some movies. Continuing this tradition, The Kentucky Waterways Alliance is hosting the Wild & Scenic Environmental Film Festival Saturday with the theme “Water Connects Us All.” Several documentaries will be screened, including “Living Lightly,” a zero-impact parable by Louisville filmmaker Robin Burke. WFPK’s John Gage will emcee the event, and Wiltshire Pantry, Riverbend Winery and the Bluegrass Brewing Company will provide food and drink. —Jonathan Meador

Dave Simonett says Trampled By Turtles owes its career to college and public radio. “Throughout the whole time we’ve been playing, it’s been the only radio support that we’ve gotten,” says Simonett, the band’s producer and main songwriter. “I find that not just for us but for other bands in similar situations as ours.” The group’s rousing new-grass takes shape in Duluth, Minn. Palomino, their latest album, opens with a drag-racer called “Wait So Long,” and from there, the Turtles rarely downshift. “Our band has always been best live. That’s where we’re able to tap into something that has been a challenge in the studio.” Del McCoury Band headlines the WFPK fundraiser. —Mat Herron

The phrase “1970s music” often conjures memories of disco and leisure suits. That’s unfortunate and unfair — not all pop culture in that confusing decade was bad. Granted, most of it was, but not all. Derby Dinner Playhouse in Clarksville will do its best to bring back some good memories for everyone with “8 Track — The Sounds of the ‘70s” through April 2. (And really, what better venue is there than dinner theater for entertainment like this?) Conceived by Rick Seeber and with musical arrangements by Michael Gribbin, “8 Track” features the music of The Emotions, The Carpenters, Helen Reddy, Cat Stevens, the Doobie Brothers, the Bee Gees, Barry Manilow, Joe Cocker, Paul Simon, James Taylor, Aretha Franklin … well, a lot of artists you probably remember. Scoff all you want; you know you’ll enjoy it. —Kevin Gibson