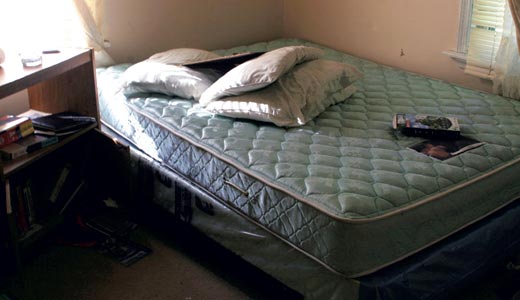 Last October, Linda Brugh checked her mailbox and noticed she’d received a letter from her mortgage company. When she opened it, the contents came as something of a shock.

“There was just this feeling of panic,” she says, recalling the moment she discovered her Fern Creek home — where she raised a family with her husband for over 20 years — was being placed into foreclosure by their lending company, CitiMortgage.

It’s a story that should sound familiar to those who can remember far enough back to 2008, when the subprime mortgage meltdown laid bare the nation’s jobless, debt-centric ghost economy. In Brugh’s case: Her husband became stricken with lupus, was diagnosed with cancer and had to have a collapsed lung removed. He died in 2008. Brugh had been out of the labor force for years to care for her ailing husband, and so their son worked to pay the mortgage until he, too, became ill and could no longer work. With both Brugh and her son collecting unemployment, and without any form of health insurance to buffer their financial strain, she tried to negotiate with CitiMortgage.

“I just broke down in tears when they told me they had worked everything out,” she says.

Although it might sound callous to call the Brughs “some of the lucky ones” (they were able to remain in their home during the entire process), the accepted narrative that Louisville has remained “relatively” unscathed by the mortgage crisis because the foreclosure rate, say, in Las Vegas or Miami dwarfs the rate here is equally callous.

And curious: Last week, The Courier-Journal ran a story with the headline “Area foreclosure filings soared in 2009.” Although the article reports that foreclosures jumped 47 percent from 2008 to 2009 (6,302 total) in the Metro Louisville region, it somehow balances that sobering fact by suggesting the obvious — that Kentucky has “fared better than most of the nation,” as if that should comfort people like Brugh and her son.

“When a foreclosure is filed, it’s gonna add about $2,500 to the initial matter,” says Ben Carter, an attorney with the Legal Aid Society who has worked with Brugh and nearly 200 other participants in Jefferson County Circuit Court’s mandatory reconciliation program, created in December 2008. The program provides a forum for lenders and borrowers to come to the table and hash out an equitable deal.

“There’s court costs, attorney’s fees, monthly service fees, and inspection fees that accrue as the house goes through the process. Then owners have to advertise the house, which costs money as well,” he says, noting that The Courier-Journal’s classified ad rates are higher for foreclosed homes than anything else.

“I call it the newspaper bailout,” he says.

When asked whether the borrowers themselves are culpable — another popular meme of the crisis — or if the problem relative to here isn’t bad enough to warrant significant attention because we’re slightly less fucked than other communities, Carter says: “Why more people aren’t paying more attention to the devastation of our neighborhoods is beyond me. I’ve got 60 clients right now who feel pretty fucked. African-Americans in other communities got fucked harder than ours did, but banks still looked at skin color in Louisville as a factor for default and profited from it.”

Carter’s assertions are backed by fact. According to the Metropolitan Housing Coalition’s 2009 housing report, the vast majority of the highest-rate mortgages (50-75.7 percent) are concentrated west of downtown Louisville — an area that same report characterizes as being at least 50 percent African-American as well as containing the city’s highest rates of poverty. The only other areas to fare anywhere near as bad were Okolona and PRP, which are predominately white, working-class neighborhoods.

“For upper and middle-income black families, 42 percent are sold high-cost loans,” she says. “Whereas whites in the same income bracket are sold the same loans at a rate of 12 percent. It’s a huge, glaring difference that leaves you to wonder, why is this happening? It really comes down to systemic racism.”

Additionally, Carter says the rate of foreclosure filings in Jefferson County hovers around 500 a month, with only 40 percent of those filings being investor (i.e., commercial) properties. This works out to around 5,000 foreclosures a year. Assuming the home has, on average, around four people living in it, that works out to about 15,000 men, women and children who will most likely end up on the streets, in a shelter or crashing on someone’s couch.

Since March 30, Legal Aid and Making Connections Network, a local community organization group, have visited 1,300 of these foreclosure-filed homes via a door-knocking campaign designed to educate borrowers about their rights and options. For four months straight, Jane Walsh, family success coordinator for Making Connections, pounded the pavement.

“It’s a big problem here,” Walsh says. “The coastal cities, they had housing bubbles. They had an enormously inflated market. Louisville never had an inflated housing market, but at the same time that housing market was fairly affordable for working people.”

According to Walsh, the combination of zero-percent financing and subprime loans — coupled with steadily rising unemployment and median wages that have fallen nearly 6.5 percent in Jefferson County over the last eight years — created a problem that didn’t happen overnight, but over a decade.

“Housing markets are profoundly local,” she says, “sometimes to the level of neighborhood. Because they are so local, it makes it hard sometimes to always tell the truth. We want to make big, broad statements, and (people) read about it as if it’s happening on the East Coast, and it makes what’s happening in Louisville seem somehow insignificant. If you live on a block in PRP, and house after house is foreclosing, that little market is as dramatic as any place in the country and is in much need.”

Foreclosures usually result in an influx of homelessness. Currently, there are an estimated 8,000 homeless individuals in Metro Louisville. But Marlene Gordon, executive director for Coalition for the Homeless, says she expects that number to jump to 11,000 due to a “tweaking” of the definition of the word “homeless” later this year.

The new definition will include people who do not have a home of their own and are instead staying with a friend or relative. “Counting the homeless is a very hard thing to do,” Gordon says.

The increase “has been exacerbated by the problems we are having with foreclosures and things of that nature,” says Bernard Minnis, assistant superintendent for diversity, equity and poverty for JCPS. “(The staff) are more concerned because some of these kids have not been in a poverty cycle before,” meaning they haven’t been homeless before.

“Should the district get involved with low-income housing for poor people? That’s a tough question,” he says. “Philosophically, the superintendent believes we need to try to help as best we can regarding agencies like Coalition for the Homeless or United Way. But that’s a hard question.”