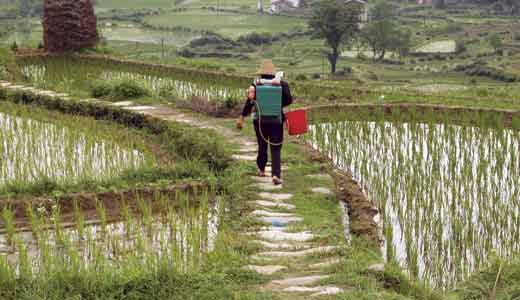 On a blustery day made for sledding on the snow-laden slopes of my memory, I came in frosted over with my childhood friends and smelled something warm and sweet that wasn’t hot chocolate.

My Hoosier mom had made rice, boiled and practically floating in a warm conduction of butter and sugar — plenty of sugar. This was my introduction to rice — in a recipe that half the world would find unthinkable.

It wasn’t as unusual as the recipe prison officials fed to Japanese Americans being quarantined in World War II internment camps — maple syrup on rice. Like my mom, the prison officials thought no one could eat plain rice without something to sweeten it.

In Louisville, and particularly in the Highlands, Crescent Hill and northeastern Jefferson County, rice is what’s for dinner, both at home and increasingly as part of the local dining scene — no sugar or syrup to be found.

In Crescent Hill, Filipino recipes at Sari Sari go with rice. Same for Cuban specialties at Havana Rumba in St. Matthews, or Azerbaijani dishes at the Caspian Grill in the Highlands, up Bardstown Road from Sitar, an Indian restaurant with rice.

That’s not all. Want a steak at O’Charley’s around town? No problem. But you can also order grilled tilapia on a bed of rice. At Outback Steakhouse, add an Outback Griller, including rice and pineapples. It’s happening — the internationalization of Louisville. The same folks who grew up on basketball, brisket and taters are now hauling their kids to soccer games and learning to use chopsticks.

The truth is, the American version of starch for dinner — the potato — is a northern climes staple. From Norway to Ireland to Maine to Idaho, supper tables for centuries have been mounted with the tuber that we smother in saturated fat-loaded butter, sour cream and even salt. But it’s the burgeoning population that swings around the equator, from about Miami to the southern tip of India, that is growing fastest, and that’s where rice is grown — and eaten.

While the average potato-eating Idahoan or Dutch family may have one or two children, a family from Somalia or Cambodia is more likely to have five, six or even 10. Around the world, billions of people play soccer and eat rice. Soccer is already here, and thanks in part to Louisville’s growing population born in the mango belt, rice may soon be coming to a plate near you.

I teach English to immigrant teens. More than half lived in refugee camps just a few years ago, and I recently had them finish this sentence: “Every day, I eat _____.”

“Rice,” said Abdullahi Abdi, a Somali who grew up in Kenya.

“We have rice three meals a day,” said Kya Wah, who was in the same refugee camp as Kler.

In the Chinese grocery stores of Louisville, near Iroquois Park, you can dig your hands into a barrel of rice. In the Highlands and St. Matthews, you get the quantity and variety you want at Amazing Grace and Rainbow Blossom.

But rice paddies in the bluegrass? No. I imagine rice-hauling freighters and trains plodding their way to heartland America from “The Rice Basket” of China, the fertile Yangtze River Valley where the seasonally flooding river has created a loamy landscape, nourished also by rainwater trickling down slopes in that sweaty mountainous region, starting in the west at the Tibetan Plateau on its way to the East China Sea.

Nine of the world’s top rice producers are in Asia, and of course China is the biggest — at 180 million tons per year.

I stood atop a hill near the Yangtze River last summer. As far as I could see, people were working in the cloud-reflecting rice paddies carved into mountainsides humming with insects.

A glistening dragonfly, with its iridescent neon blue body, hovered above the surface of the flooded paddy, where it alighted on a nubile jade-colored rice shoot. Looking into the clear water, I saw small footprints. I imagined centuries of men, women and children bending, using their tired, nimble fingers to press the shoots into the caramel-colored mud.

Later, just a few miles away, a man and wife with their pants rolled up stood planted in muddy water up to their calves. Each held a bundle of rice shoots. In my mind, I flashed back to the time I tried to join Mexican migrant laborers picking strawberries under a punishing sun at Huber’s Farm. I lasted about 45 minutes.

My wife, whose ancestors lived in the southern rice-growing regions, told me Chinese children know a poem that reminds them the sweat of Chinese farmers gave life to the rice in their bowls.

Chinese idioms also are packed with rice. A boring but reliable and hardworking husband, for example, is known as an “iron rice bowl.” When a child fails to finish his rice, a mother will scold: “For every grain you don’t eat, your wife will have one pock mark on her face!”

When Chinese people meet, they pretend to hold a rice bowl as they mime pulling steamed rice to their mouth with imaginary chopsticks. They ask: “Have you eaten rice yet?"

I don’t see that happening soon here in Louisville. But then again, there are many dads here who couldn’t have imagined getting red-faced and excited about their child’s team winning a big soccer game: 1-0.