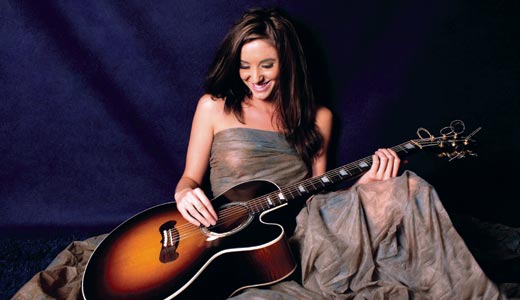 For singer-songwriter Andrea Davidson, songs come when she surrounds herself with nature — “when I’m outside, lots of trees, or when a storm is coming.”

On her second CD, Retracing Steps, Davidson reached for a more personal theme. “There’s one thing that ties (the songs) together, and that’s honesty,” she says. “These songs came from the right place.”

Davidson is the kind of artist who will point out her flaws when you ask about her forte.

“I make a living playing in bars,” says Davidson, who’s done so for three years. “So I was trying to write with the people who come out to my shows in mind. And sometimes the things I’m writing about are not happy, get-drunk-to songs.”

She sought to abandon her please-’em-all tendency with this new set.

“These songs are for me. I’m starting to learn what my passions are, what my beliefs are, and what matters to me and what doesn’t.”

Davidson takes listeners through different venues on her alt-pop album. The title track hops along to the kind of squealing brass you’d sample at a jazz club. “Kentucky Road” puts you alone at a piano bar at closing time.

Davidson credits the variety of “feels” to engineer and co-producer Brian Cronin. He also balanced her out in terms of patience, she says.

“The first record — I had set the CD release before we were done recording it. This is different. This is a different approach,” she says. “We decided to do the record with patience, with experimentation.”

The pair took about a year to record it. Not all of the 12 tracks that appear on the new disc were written when the process started. And there were times when they didn’t get together for weeks.

At one point last spring, she walked away from the project to teach guitar to children in South Africa. “It put a lot of things into prospective for me. I’ve been kind of opening my mind to everything.”

None of the tracks on Retracing Steps were directly written about those experiences, the musical experimentation, nonetheless, proceeded once she got back.