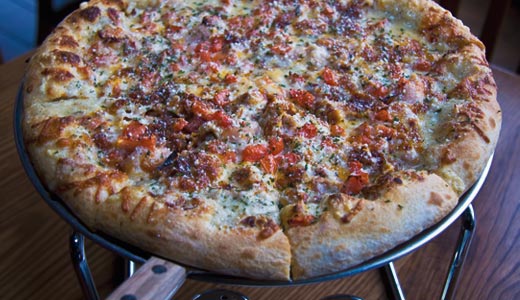 If the Hot Brown is really Louisville’s most iconic local culinary tradition, we’re in trouble. It’s not what you’d call the most creative food invention that ever landed on a plate. Frankly, it’s a little embarrassing to try to list the dishes that made Louisville famous.

Modjeskas are mere chewy caramel-coated marshmallows, renamed to suck up to Polish actress Helena Modjeska, who was a big hit in Louisville … in 1883.

Burgoo? This hearty stew is Appalachian fare, not city food. Some country folk even put squirrel meat and maybe weasel in it. It’s not even original but an import from coastal Georgia, where they call it “Brunswick stew.”

And the famous Hot Brown — allegedly fashioned as a midnight snack for Roaring Twenties revelers famished after a night of dancing in the Brown Hotel’s Crystal Ballroom — is just an open-faced sandwich of turkey, bacon and cheesy Mornay sauce. Nothing so inventive there, and it’s a cardiologist’s nightmare.

Be that as it may, the inventive folks at BoomBozz Taphouse in the Highlands have put a new spin on the old tradition by marrying it in weird but delicious union with a pizza.

You heard that right: While it’s available, order the Hot Brown pizza ($15.99 large, $12.99 medium) at BoomBozz Taphouse, and you’ll be rewarded with a deconstructed Hot Brown, shorn of its toast points and spread instead atop an excellent, thin crust, fired in the pizza oven until the crust is toasty and the toppings melty.

You have to be open-minded about innovation to accept this bizarre yoking of ingredients previously thought incompatible, and there’s probably a verse somewhere in Leviticus that forbids it. My wife was horrified, and LouisvilleHotBytes Forum pal Bill P. put it succinctly, saying, “The ghost of Pepe is weeping someplace in New Haven.”

I say, let the originator of New Haven-style pizza weep. I unrepentantly enjoyed this invention. Ample sliced deli turkey, crumbled bacon, diced tomato and a rich, creamy cheese sauce with a dash of hot pepper that warms the back of your throat all come together on a cracker-thin pizza with a crusty rim that’s reminiscent of artisanal Italian bread. I like it.

No animals were harmed in making this chilidog

Speaking of creative eateries, Conez & Coneyz may be one of the smallest dining venues on Frankfort Avenue, but it’s also one of the most eager to please.

When the owners chose to set up a hot-dog stand last year near the epicenter of an urban neighborhood rich in recovering hippies and seminary students (occasionally both embodied in the same person), they weren’t all that surprised to hear an instant demand for a vegetarian dawg.

Ultimately, they sourced two dogs that weren’t merely vegetarian but vegan: a Loma Linda brand item that turns to textured vegetable prote for almost-sausage flavor; and a Vegi-Dog made by Cedar Lake that’s all-grain protein. One chilly afternoon, I tried the Loma Linda as a chilidog, topped with vegetarian chili and chopped onions.

The verdict: It was pretty darn good. Put it in front of me without mentioning it was meatless, and I never would have guessed. On close, critical examination, the chili had a hint of fruit flavor that I often find in vegan fare, and the dog was a bit softer in texture and milder in flavor than Conez & Coneyz’s excellent Kowalski “snap” dogs (beef and pork) and Hebrew National dogs (beef only). But they could have fooled me … and the $3.50 price for the chilidog was right.

I know I’ve helped close a few marginal restaurants with bad reviews in the past, but I’m not taking the blame for Potstickers on Baxter, reviewed in last week’s LEO Weekly. It turns out the restaurant shut down after press time, before the newspaper hit the streets. I regret any closing, but my advice given to restaurateur Edward Lee in that review remains: If you put your name and reputation behind a new restaurant, you need to keep your eyes and your hands on what’s happening there. I love the Potstickers concept. I hope some day you can make it work.