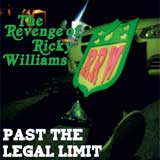 Party-punk outfit The Revenge of Ricky Williams’ debut is solid almost in spite of itself. On their website, they list their No. 1 influence as No Doubt, which raises eyebrows. Early ’90s No Doubt? Ska No Doubt? Gwen Stefani in her Harajuku phase? That reference could mean everything, but for the Revengers, it doesn’t mean a thing. Strong-voiced Pam Newman missed the obvious (and favorable) comparison to The Gossip’s Beth Ditto; listen to “We Party Because We’re Alive” and tell me you don’t hear their common soulful and kind of yodel-y quality. There are Blondie-like moments (“The Depth of the Flight”), replete with snarly vocals and driving guitar riffs. Despite its dumb name, “Sweet Wolf Shirt” redeems itself, using fragments of outside conversations that lend an enviable “Hey-remember-how-great-the-Pixies-were?” vibe. Even though some of the lyrics are ridiculous, Past borrows from a higher canon than mid-’90s cartoon-pop. And who cares about vague adjectives and lists of influences? Revenge of Ricky Williams will make you d.a.n.c.e.