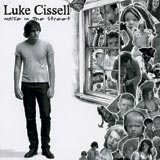 Luke Cissell’s songs are as modest as his ambitions are admirably outsized, a tension perfectly illustrated by the hilariously incongruous album credit: “Recorded in New York City and Memphis, Indiana.” Like many singer-songwriters, Cissell is aggressively humorless, and coupled with the disc’s nearly hour-long runtime, Noise in the Street occasionally feels lead-footed. Cissell is talented enough to break up the monotony at times, which ultimately makes Noise an album of moments, such as the Steve Hackett-esque intro of “Modern Modesty,” the gossamer finger-picking on “Fool to Hide,” or the airy, Neil Finn-like chord progressions of “A Thousand Accidents.” These highlights may not be enough to wash out the taste of the overwrought “Nobody’s Hero” or the bloated, ponderous instrumental “Geryon,” but they elevate Noise to the level of an album plagued merely by inconsistency, rather than a lack of ideas.