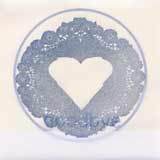 John King’s tenure as the sultan of Louisville love songs has sadly come to an end. The great writers and singers of the mostly exceptional songs that make it onto the compilation every year will have to find audiences elsewhere. The Mack and Trophy Wives stand out on the first disc, the former mixing indie rock with a pop sensibility, a hybrid that Louisville has seemed to lack for the past half-decade or so. I have experienced Trophy Wives live and was honestly shocked to hear an acoustic track reminiscent of Nirvana Unplugged instead of a punk-rock blitzkrieg. Joe Manning, in “Battle Hymn of the Bank Robbers,” sings lyrics that would shame Leonard Cohen, eclipsing all the other tracks, consistent as they are, on the anniversary disc.