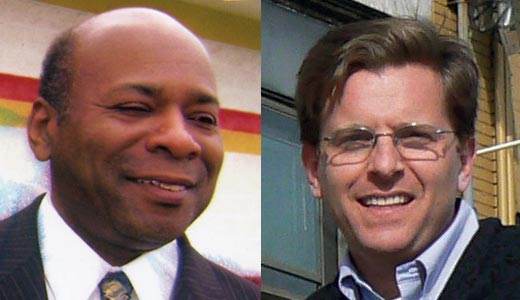 For progressive voters scanning the mayoral field there isn’t a consensus on which candidate might be their darling. Last week, after the “People’s Forum,” a mayoral candidate discussion hosted by 10 social-justice groups, many community activists in attendance admitted they were left flat and unimpressed.

No candidate stood out, according to organizers, but grassroots advocates sparingly mentioned interest in hearing more from Democrat Tyler Allen, who is called the “big idea” candidate by supporters. Everyone is waiting to see if Allen can fulfill that role as an anti-establishment candidate who will graduate from the class of second-tier mayoral hopefuls and resonate with voters who’ve yet to find a candidate willing to speak to their issues directly.

During a recent interview with LEO Weekly, for instance, the co-founder of 8664 managed to tie the recent service cuts made by Transit Authority of River City to civic leaders, further explaining how a lack of alternative public transit investments have cut opportunities for Louisville’s working people.

“Right when it’s most critical for people to get jobs, the public transportation service is going in the other direction,” he says. “With the rising cost of fuel and automobiles, communities have a responsibility to keep (people) mobile and to have that public infrastructure.”

Earlier this week, Allen called out The Courier-Journal’s editorial board for telling the mayoral candidates to “get with the plan” and support the Ohio River Bridges Project.

“The C-J thinks the candidates for mayor should get in line,” Allen said in a statement. “Louisville deserves a ‘new wave’ of leaders who don’t get in line, but rather listen to the citizens, demonstrate a vision and move Louisville forward, starting with an East End Bridge.”

Earlier this month, Democratic primary frontrunner Greg Fischer, a Louisville businessman, was applauded by some political observers for voicing support for building the East End Bridge, and was in turn scolded by the C-J editorial board.

The Allen campaign is quick to point out that their candidate has been arguing for construction of the East End Bridge for years.

“It is incumbent on any candidate — particularly a self-proclaimed frontrunner — who wants to talk about the East End Bridge to make clear their position on the Bridges Project as a whole, as well as the tolling authority,” Allen says. “Simply saying you support building the East End Bridge now isn’t enough.”

If the Allen campaign can find a way to get their message out to a broader audience more consistently and take a few risks on topics other than transportation, the “one-issue” candidate might actually pose a real threat.

The mayoral election is the main event in the May primary, but there are a few Metro Council races this year that are worth watching. In the past, however, Louisville voters have consistently stuck with incumbents: Since city and county governments joined forces in 2003, no elected council member has ever been unseated.

In west Louisville, a competitive race could be the Democratic primary battle for the 1st District seat between Councilwoman Judy Green and retired police officer and anti-gang activist Ray Barker Sr., known by his hip-hop alter ego “Sir Friendly C.”

Barker was admittedly naïve about campaigning when he made an unsuccessful bid four years ago against Green and then-Councilman Leonard Watkins (who had been appointed to the council seat). In this year’s election, Barker, who now manages a McDonald’s franchise at 12th & Broadway, is eager to ignite a debate about decreasing crime, creating more employment opportunities and improving public services.

The conversation around those issues has waned over the past four years, he says, adding that voters in the 1st District are disappointed that so much time was wasted on Green’s “saggy pants” resolution, which encouraged citizens to pull up their baggy pants.

“The sagging pants (resolution) was a nice gesture, but it didn’t improve the quality of life in the district,” says Barker. “It didn’t have any teeth to it and the kids continue to sag. What I consider to be important in the district are jobs for our young people.”

“The consensus is everybody is sick of the partisan politics being played,” says Yates. “With Councilman Hawkins, there’s always a crisis and according to him the sky is always falling. We need someone who can work with other leaders, solve problems and bring prosperity before going to the news media.”

Since announcing his candidacy, Yates has showed off his party pedigree with a number of endorsements by big-name Democrats from city and state government. Last month, he held a fundraiser hosted by Kentucky Speaker of the House Greg Stumbo, D-Prestonsburg, whom Yates worked for as an assistant attorney general in 2006.

Though Councilman Hawkins hasn’t begun raising any money, he remains confident that he’s earned a reputation for standing up to the mayor and that he has represented his constituents well. Despite being criticized by the Mayor’s Office, condemned by council Democrats and his potential general election challenger, Hawkins, like many of his colleagues on both sides of the aisle, knows the weight a sitting council member carries with voters. He expects that will pay off.

“Incumbency is a powerful tool…” says Hawkins. “In the end that will be rewarded.”