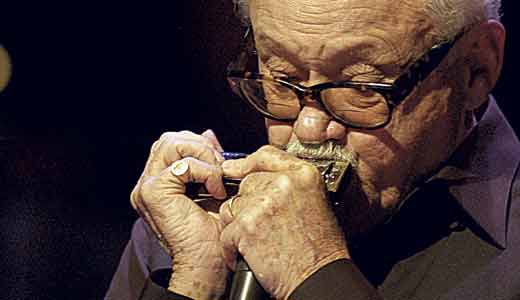 Toots Thielemans performed with Dizzy Gillespie and Charlie Parker, among others, and the National Endowment for the Arts named him a 2009 Jazz Master.photo by jos knaepen

Since 1992, University of Louisville’s Jazz Fest, née Jazz Week, has attracted titans of jazz. Dave Brubeck, Elvin Jones, Roy Haynes and Marian McPartland are but a few of the high-wattage craftsmen who have performed and instructed jazz students on the genre’s finer points.

“The original intent of Jazz Week was to afford our students the opportunity to interact and perform alongside major jazz artists,” says Michael A. Tracy, director of the Jamey Aebersold Jazz Studies Program at U of L’s School of Music. “I wanted more than just the cursory concert where people sit and listen, then go home.”

Born April 29, 1922, in Brussels, Thielemans played accordion and guitar at an early age and was influenced by Django Reinhardt, but his trademark is colorful, award-winning harmonica work. He’s performed with Dizzy Gillespie and Charlie Parker, and the National Endowment for the Arts named Thielemans a 2009 Jazz Master, earning him select company with George Benson, Jimmy Cobb and 2009 Jazz Week performer Lee Konitz.

Speaking by phone from his home in Brussels, Belgium, Thielemans performed Chick Corea’s “Windows” impromptu, and says his discovery of jazz was a fluke.

LEO: Growing up in Brussels, what drew you to jazz?
Toots Thielemans: I started to listen in the ’30s, when I was 15. I was not exposed to it in my family; it was an accident. There was a record store near me, which had Louis Armstrong and the Mills Brothers.

LEO: What is special about your playing with Werner?
TT: I cannot explain. Sometimes I ask, “Kenny, don’t you feel you’re slumming with me?” “No, no.” He seems to respond to my lyrical approach. There are great moments. We look forward to it. I still have the same enthusiasm, and I look forward to playing with Kenny every six months at least — it will be like Lover’s leap (laughs).

Feb. 24 — International Night, featuring Brazilian pianist Renato Vasconcellos and the Russian Open World Jazz Ensemble. “International Night grew out of the numerous international exchange programs that I have helped develop over the past 10 years,” Tracy says. “Our jazz program has initiated exchanges with institutions in Argentina, Australia, Brazil, England, Poland and Russia, with more inquiring.”

Feb. 26 — Valery Ponomarev with Jazz Ensemble I, directed by John La Barbera, and the Faculty Jazz Trio. “Valery is a wonderful player and a logical connection, since we will be hosting our sixth group from Russia during Jazz Week,” Tracy says. In addition to performing, Valery will host clinics and workshops with students.

Feb. 27 — Saxophonist Houston Person with Jazz Ensemble I and the Faculty Jazz Combo. “Houston is part of that long line of soulful blues-based saxophonists like (Coleman) Hawkins, (Ben) Webster, (Gene) Ammons and (Stanley) Turrentine,” Tracy says. “I look to have diversity in our program, and his music will offer another side of jazz, balancing the bop of Valery and the stylings of Toots.”