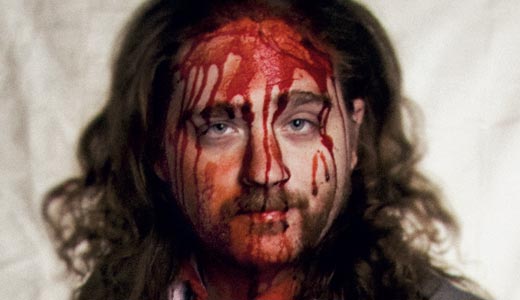 John King started Louisville Is For Lovers in 2000 when he noticed bands would come and go without releasing any music.photo by ron jasin

John King won’t hesitate to tell you how he feels about the end of the Louisville Is For Lovers compilation series.

“I feel like I have a little bit of postpartum depression for sure,” the producer says. “I’m 32. I’ve spent my entire adult life on this project. It’s just as popular as it’s ever been.”

The last installment of the compilation series, which began chronicling the lovey side of Louisville rock around Valentine’s Day 10 years ago, went on sale Feb. 2. The final release is not all melancholy for King. If it is indeed a breakup, it’s one where your ex left a slew of great stuff at your place.

The main disc of Vol. 10, titled Goodbye, lasts more than an hour, and each copy comes with a code that allows users to download an additional 14 songs for free. The first 200 copies come with an Anniversary disc, which contains another 15 lost and rare tracks from the last decade in Louisville music.

Two live shows are planned to celebrate the massive release. The first show, “Enchantment Under The Sea,” is a 1950s-style prom this Saturday. The best dressed will win tickets to Sunday’s show with Yim Yames and Bootsie Anne at the Seelbach’s Rathskeller. The show sold out in 45 minutes, so the only way to get tickets is to win the costume contest.

King started the compilation in 2000 because great bands would frequently come and go without ever recording any music. The only band signed to a label at that time was My Morning Jacket, “but they were still playing in coffee shops,” King says.

As he started working on it, a groundswell of support began to emerge. Friends and artists came together to help — with music, printing, packaging and anything else. All sorts of retailers, not just music stores, put the album on shelves “just to try to get it out there.” Once it finally did, people kept asking: “Can they be on the next one?”

Tamara Dearing, whose songs have appeared on the compilation since 2007, says it not only connects the public with local music and brings out new acts, but it’s also a tool for artists to connect with each other. “You never know what great things can develop from those connections,” she says. “It could be anything from sharing shows to starting side projects together or just making a friend.”

Billy Petot of Whistle Peak says he’s been introduced to a great deal of music through the album. “I remember years ago wanting to be on the compilation so bad, but this was before I ever had any confidence in our music.”

In late 2007, he submitted a couple songs and made the cut. He says he and bandmate David Boston “would not have formed Whistle Peak if (King) hadn’t liked what we do.”

King acknowledges that self-releases, social networking and digital downloads have diminished the need for compilation albums. “Before, you’d get a compilation because you knew one or two of the bands. You bought the record, then you heard another 10 bands that you would have never come across before,” he says. “The world of music has changed, and I didn’t want to change this project. I wanted to stick to the same standards it’s always been.”

This year will be the first time the compilation has been released simultaneously with a digital download, a test to see if fans will go for that version.