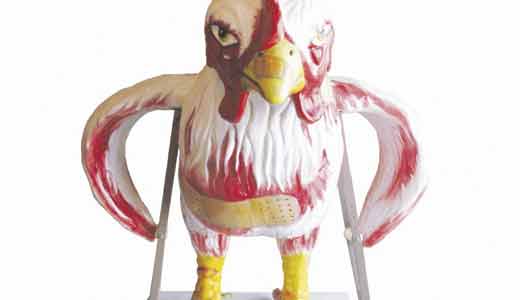 If someone were to compile an encyclopedia of American municipal screw-ups — and not call it “The Wire” — then the section pertaining to Metro Louisville would no doubt contain more than its fair share of notable entries.

Although there’d be plenty of gaffes to choose from, only the perpetually malfunctioning Louisville Falls Fountain approximates the absurdity of the city’s ongoing battle with People for the Ethical Treatment of Animals over a 5-and-a-half-foot tall, 250-pound wood-and-fiberglass crippled chicken statue that proclaims “KFC Cripples Chickens.”

Now, after six months of unsuccessfully reapplying for the necessary permit to display the statue and exchanging voluminous legal correspondence, PETA alleges the city is violating their First Amendment rights by routinely denying their applications under constantly shifting grounds.

“The city of Louisville is playing fast and loose with Americans’ right to free speech in its bid to keep the public in the dark about KFC’s suppliers’ abusive treatment of chickens,” PETA Executive Vice President Tracy Reiman said via press release. “One has to wonder why Louisville city officials think that they can deny residents their right to know how one of the city’s biggest businesses is associated with such cruel things as scalding chickens to death.”

To be fair, a quick Google search of “KFC cruelty” is far more enlightening toward this end than any potential statue could hope to be — but what of Reiman’s charge? Is the city denying our collective right to know the truth behind Harlan Sanders’ potentially demonic smile?

Since July 2009, PETA has wrangled with the Metro Department of Public Works and Assets and the Division of Inspections, Permits and Licenses (IPL) over an at-times labyrinthine permitting process to obtain right-of-way permission for the cartoonish effigy. If ultimately approved, the statue would be erected at any one of a handful of proposed downtown locations for 90 days.

“It’s still in the process as far as I can tell,” says Jim Mims, director of IPL. Mims contends that the special event permit PETA is now applying for is subject to review by multiple city agencies, including the fire department and police department, with public works acting as final arbiter.

“As far as I’m concerned, when all the agencies approve it we’ll issue a permit,” says Mims. “I hate to sound like I don’t care about things like this, but (free speech) doesn’t really enter into our decision-making process. From our standpoint — a codes and regulations standpoint — we’re looking at the technical and physical requirements, so it’s an issue that we wouldn’t be so much involved in.”

But let’s go back to August 2009 when Assistant Director of Metro Public Works Richard Storm wrote the first in a series of rejection letters to PETA. Curiously, Storm issued a “45-day moratorium on issuance of permits” for statues such as PETA’s crippled chicken in order to “conduct research and to develop regulations that address requests of that nature.” No other reason was given, and it is unclear whether any such regulations have actually been developed.

PETA’s lawyers fired back just days later, pointing out that Storm failed to identify any particular ordinance necessitating such a moratorium, which they considered arbitrary and unlawful, especially given the city is already overrun with wood-and-fiberglass horses celebrating the Kentucky Derby.

Regarding the moratorium, Mims says that because it occurred before he was hired as a Metro employee, the reasons behind it are beyond his realm of knowledge.

Interestingly, all of LEO Weekly’s calls to the Department of Public Works and Assets were filtered through the Mayor’s Office, whose spokesman, Chris Poynter, insisted he knew little of the affair and had no opinion on the matter.

“We are letting Jim (Mims) finish the process,” says Poynter. “As you know, the mayor doesn’t issue permits.”

Poynter suggested I talk to Mims, who “has the final say” in the matter — which is odd because, at least according to Mims, the final say rests with the Department of Public Works and its director, Ted Pullen, whom could not be reached for comment.

In September 2009, Pullen sent PETA a revised permit application packet, which the organization found unacceptable for two reasons, which were outlined in a Dec. 2 letter to the city: an exorbitant $100 permit processing fee and a provision requiring signatures of all property owners adjacent to “The Chicken,” which PETA alleges gives third parties improper veto power over the content of their poultry-empowering message.

It was at this juncture that PETA also learned it would be necessary not only to submit a revised application to public works, but also to seek separate approval for a “special event” through IPL.

“It became clear after the initial confusion that we needed to obtain a special events permit,” says Jeff Kerr, general counsel for PETA.

Despite fine-tuning their resubmitted applications, Kerr says the dueling permits were denied again, this time for not paying the $100 fee and because of technical inaccuracies within the proposal’s site map.

“At the end of January, the special event permit was denied because public works didn’t grant us the permit,” he says. “The codes and regulations’ special events permit doesn’t explicitly require approval from public works.”

In other words, PETA alleges that the two agencies are playing a game of keep-away, with PETA acting as the short guy stuck in the middle. The Department of Public Works and Assets’ Rules and Regulations clearly spell out that Pullen’s approval does not “include any object authorized by a permit issued by Codes and Regulations for … a special event,” meaning the two departments are mutually exclusive in matters such as these.

So there you have it: An unexplained mysterious moratorium, a hasty revision to public right-of-way ordinances, institutional malaise and a 5-and-a-half-foot tall crippled chicken gathering dust next to the Ark of the Covenant in a secret government warehouse … but for how long?

Although PETA campaign manager Lindsay Rajt says she’s never encountered the level of resistance she has in Louisville, she’s optimistic about the statue’s future.

“Of course, with the crippled chicken statue, our priority was to place the crippled chicken in the very city where birds are allowed to suffer,” says Rajt. “We’re confident that we’ll get approval and, after the chicken roosts in Louisville for a time, we’ll be touring it in cities across the country.”