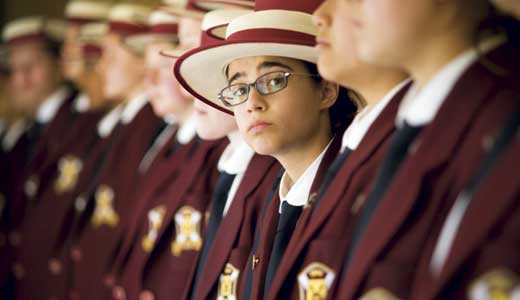 The opening scene in “Hey, Hey It’s Esther Blueburger” shows Esther, hiding out in the school attic, watching her private-school classmates dance, cartwheel and eat lunch in unison. Conformity is king in high school, and anyone on the outside feels as alone, out of place and pathetic as Esther does in the attic.

“Esther Blueburger,” written and directed by newcomer Cathy Randall, balances the depressing realism of fitting in with the quirky worldview of Esther (Danielle Catanzariti), where ducks are friends, god is available for conference through the toilet, and break-dancing at your bat mitzvah is completely normal. While escaping briefly from said bat mitzvah, Esther befriends Sunni (Keisha Castle-Hughes), an effortlessly cool neighbor who attends public school.

Esther and Sunni hit it off immediately — perhaps Sunni sees a bit of herself in Esther’s insecure nature and outsider status. And while Esther’s home life is structured and strict, Sunni and her unconventional, single mother (Toni Collette) offer a laid-back, easygoing atmosphere.

Esther finds her place with Sunni and her mom, and she eventually swaps her private school for public school — without telling her parents, of course. At Sunni’s school, Esther is cool. She fits in for the first time in her life, yet she starts to become the person she hated — she bullies outsiders, makes out at parties and conforms to the other girls in her clique.

“Esther Blueburger” is an Australian film, which naturally draws comparisons to “Muriel’s Wedding,” a story that also examined being an outsider in your own world and also starred Collette. But a better comparison would be “Mean Girls,” which showed the cruel nature of high school on both sides of the cool factor.