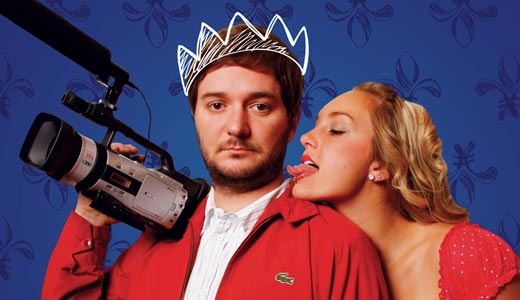 “I hate filmmakers,” says Kris Rommel during a break from poster hanging. Not words you’d expect from the creator of a film festival, especially one with a workload like Rommel’s. As host of “Derby City Film Chat,” a weekly radio blog, Rommel airs this disgust of filmmakers by mercilessly promoting their films, even plugging screenings that are in direct conflict with his own festival.

When he flashes back to year one of the Derby City Film Festival, it’s clear that Rommel’s “hate” is closer to a passion-butting-heads-with-frustration kind of thing. Nineteen locally produced films were featured then, and of those selections, only six directors traveled the short distance to attend their own screenings. Considering the Naples-to-Los Angeles road trip Rommel once embarked on to support his first film, his bristly mood is forgivable. In a town just starting to foster its own scene, area directors might heed the Woody Allen belief that 80 percent of show business is showing up.

Praised for “wild ambition” by this paper a season ago, Derby City is trotting out a leaner program this go round. Rommel and wife, Ashley, have trimmed the event from five days to three and have shifted venues from a 1,700-seat house to the Clifton Center’s 500. “Our reach may have exceeded our grasp,” admits Rommel when asked about the adjustments. The organizers have also conceded the month of October to the better-funded Louisville International Festival of Film (LIFF). It seems only fitting that a film festival yield to a festival of film, but beyond the natural order of things, the move more evenly disperses a sudden flurry of fests in Louisville.

So, what’s with all the festivals? Rommel says that when he conceived of Derby City in ‘08, there wasn’t anything running that matched its scope. Genre fests like the Jewish Film Festival, Fright Night and Last Call at The Rudyard Kipling have been operating for years. But following 2002’s Louisville Film and Video Festival, there’d been a virtual dormancy of large, competitive festivals in town. Now with the LIFF and June’s Flyover Film Festival added to the calendar, it feels as though a glut of cineastes have collided in a dash to fill the same void.

We should hope there’s enough interest to support this wealth of film, as each festival offers something truly distinct. Yet, in preparing this article, I have encountered grumblings around the circuit about an approaching saturation point. This crescendoed with speculation that the International Festival of Film was possibly dissolving before its second season. I was able to reach Brett Bachmann, CEO of the Louisville Film Arts Institute (nonprofit arm of the LIFF), who quickly dashed these rumors. Despite LIFF’s inactive website, Bachmann was definitive in the festival’s objectives for 2010. The event, which benefits Jefferson County Public Schools, will roll out an expanded program in October and issue a call for submissions in the coming weeks.

In the meantime, Kris Rommel is projecting big fun at the Derby City Film Fest. Added to this year’s festivities are acting, screenwriting and FX makeup workshops, as well as an additional screen to better accommodate a busy lineup. The slate will feature 46 films from 12 countries, 21 of those having their premiere this weekend.

Asked what to look out for, Rommel champions mostly local talent. A favorite is “Blue King,” the second narrative feature from Louisville’s Flores Brothers (or “The Brothers Flores” as they’ve branded themselves). This mockumentary follows a dilettante pornographer and the troupe of adult performers who hope to ride his coattails into the mainstream. Unlike its lead character, “Blue King” manages to stay within itself, always a welcome trait in low-budget indies. The best of this breed neither over-reach nor apologize for shoestring financing — a practice the Brothers Flores display here.

Rommel also is excited to present his first entry from “The City of Firsts.” Danville, Ky., has had scattered brushes with cinema in its day, including two Disney productions and 1957’s star-studded “Raintree County.” Now there’s “Cannonball,” a feature-length comedy that examines the city’s backyard wrestling circuit and Bigsquatch problem. “Cannonball” was shot on location and features a trio of loveable Danville lifers: Scott Stafford, Todd Sheene and Allen Martin.

The selection expected to make the most noise is “Deadland,” which marks a return to Derby City for Los Angeles director David O’Steen and writer/actor Gary Weeks. The tandem’s film “29 Reasons to Run” screened in last year’s festival, and their short “Clones Gone Wild” will be showing alongside “Deadland” on opening night. Rommel credits this team for consistently churning out quality indies with a big-budget look and predicts a healthy, post-festival life for their apocalyptic thriller “Deadland.”