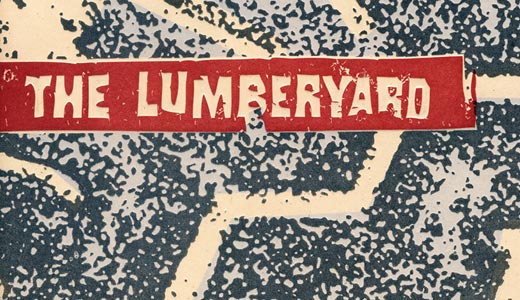 When we think of poetry, we imagine lecture halls and podiums, bookish professors glancing up from mounds of verse into the silent attendance of an academic crowd. We certainly don’t think of diesel combustion, Flying Js and the crunch of power chords, but Jen Woods and those at Lumberyard magazine would love us to start.

“I never bought the prejudice that poetry is only for the learned and academic,” says Woods, chief editor of the magazine.

Lumberyard’s fifth issue targets none other than truckers and metal-music aficionados traditionally assumed to be adverse to the literary scene. Woods professes “an affinity for truckers her whole life.” As a kid in Missouri, she liked to sing made-up ditties to entertain truckers on her grandfather’s CB. “There were plenty of miles to cover in the Ozarks that didn’t have an AM radio station back then, and so I guess monotony is to blame for the number of truckers who would express appreciation for my little songs.”

Truckers have a lot of downtime to read, which many of them do, and voraciously. This fact, and an inherent sympathy for those lonely stewards of the open road, inspired Woods to put out this “Truckin” issue. Lumberyard has gone so far as to approach various trucker magazines like Trucker News and Overdrive, as well as the “Road Dog Trucking” Sirius-XM radio show to promote the issue. They’re also courting endorsement from the biodiesel Mecca of roadside stops, Willie’s Place in Carl’s Corner, Texas, owned by another bard of the lost highway — Willie Nelson.

Though bold and unconventional, Lumberyard is no gimmick or crackpot venture. The magazine boasts a Platinum Award from the Louisville Graphic Design Association — the highest accolade offered from LGDA’s “20th Annual 100 Show.” Back in November, Lumberyard also received recognition in The New York Times by the heralded critic Dwight Garner for their “Hollywood Western Disco” issue. The Platinum Award is no small achievement considering Lumberyard beat out hundreds of local competitors, including powerhouse advertising agencies stationed with Brown-Forman and Yum! Brands.

Each letterpress edition of Lumberyard is assembled by hand. Eric Woods — Jen’s brother — owns Firecracker Press, which designs and prints the issues out of St. Louis. Letterpresses use plates dipped in ink that are then pressed into the page. The alignment is never exactly same, so each copy of Lumberyard is unique. The magazine gets its name from the family-owned Sweazea Lumberyard & Hardware Company where the Woods siblings frolicked as kids.

Other factors contributing to Lumberyard’s success are the magazine’s low overhead and few employees. Without the unmitigated access to Firecracker’s letterpress, Lumberyard would be unfeasible and much too expensive to operate at profit. Currently, they only print 500 copies per issue and run only two issues per year. Copies are sold primarily online for $10, but folks around town can pick them up at Carmichael’s Bookstore and ear X-tacy.

“I don’t know what it is, but I watch people smile ear-to-ear as they flip through the magazine for the first time,” says Jen Woods, but there are plenty of reasons why.

Once you open it, you want to keep it. The artwork — zany and alive — pops off the page, enticing you to thumb each letterpress ink scratch and indentation. Newcomers shouldn’t be surprised to find a chimp wielding an axe at a frog, or a cartoon figure laughing so hard they burst into stitches — literally — and become mummified in gauze. Likewise, the poems in each issue match the graphic intensity of the art. “Handicap Van Conversion,” by Louisville’s own Brett Ralph, is a persona-driven piece from the perspective of a man otherized by the traumas of a severe car wreck. In the poem, the narrator peers from the hidden perch of his van into a house where a man and a woman munch on frozen dinners in front of the TV. Haunted and alone, the narrator seeks not “to know them,” or to be known by them, but to be inserted in his own view like a figure into a plastic diorama. It’s not that the narrator wants to belong so much as to become something he can abide looking at again.

The writers in this issue span from published poets such as Ralph and current U of L Axton Fellow Derek Mong, to bright unknowns like Yikilo Hiskiss and Tiffany Turner, who attends the low-residency master of fine arts program at Murray State.

The preponderance of the artwork and graphics come from a variety of “found” sources, including obscure comic books, antique medical journals and a whimsical collection of authentic plate advertisements kept at Firecracker Press. Unlike other poetry magazines, Lumberyard isn’t afraid to alter the layout of an author’s poem. In fact, the magazine’s offset and grab-bag font sizes allow the topography of each poem to blend in with the artwork, and vice versa. Also, each issue — like the box cereal we eat as kids — contains a “surprise inside.” Past prizes include a pocket-sized short story and a centerfold poem. The current “Truckin” issue offers a CD from the local metal band Seclusion, and the first track, “Three Bridges,” is the musical result of Stem Holder’s lyrics appearing on the accompanying page. The CD targets the other new audience this issue hopes to usher in — metalheads.

This past summer, Woods met Stem Holder, who let her peruse his notebooks.

“It was the first time in a while I saw someone filling up a journal who wasn’t trying to finish a manuscript,” she says. There’s an introspection and sensitivity in Stem’s work — conducive to metal music — eager to pump a fist and state: “I am here and I long to connect.” Of course, a connection is exactly what Lumberyard has in mind with the local metal fan base.