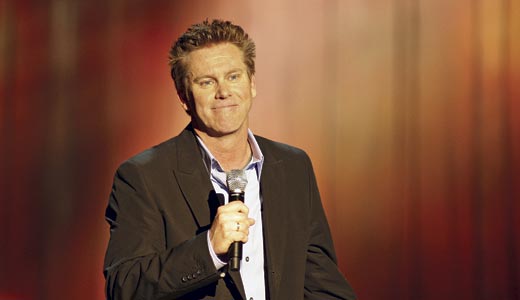 In the mid-’90s, Brian Regan won “Best Club Comedian” from the American Comedy Awards, and he hasn’t looked back since. His career trajectory has risen and led to numerous Comedy Central specials (including his most recent, 2008’s “The Epitome of Hyperbole”) and countless appearances on the “Bob & Tom” morning radio show, and he’s done it all without working blue. “I get a $1,000 bonus every time I work clean,” he says “And I fuckin’ love that! No, I just happen to like working clean. But there are comedians who work blue, or down right dirty, who I think are great.” Brian will be performing Saturday night at the Brown Theatre.

LEO: Who inspired you to get on stage and be a stand-up comedian?

Brian Regan: When I first decided to become a comedian, I was a student at a small Midwestern college, before cable, before Internet, before fire. Because of this, I wasn’t really influenced by too many other comedians. My early comedy thoughts had to come out of my own goofy brain.

LEO: How much of your act comes from your day-to-day life?

BR: Some of my act comes from my actual day-to-day life. Some comes from day-to-day life but is then twisted into not-so-day-to-day metaphorical balloon animals. And some has nothing whatsoever to do with the world in which we live.

LEO: On this tour, are you doing new material or are you performing the material from “Epitome of Hyperbole”?

BR: My show will hopefully be mostly new stuff. Even before I lay something down, on either a CD or DVD, I try to start moving away from that stuff. It’s great to have fans, but you don’t want them knowing all your stuff inside and out. I like to keep offering them new material.

LEO: Do you have any memorable heckles or road stories?

BR: One time a guy threw a whale harpoon through my chest. Huh? No, that’s not true. Once, outside a restaurant, I had a guy walk past me, stop, turn, walk back to me, and say, “Duuude, you have the huuugest following amongst pot smokers.”

LEO: Are there any jokes you have particular affection for more than others?

BR: My jokes are sort of like my kids, I only have two of ’em. I mean I try to like them equally. But, the newer the material, the more I enjoy doing it. It’s sort of like playing in snow — it’s always fun, but there’s nothing like running in virgin snow.

LEO: Have you ever said anything on stage you wish you hadn’t?

BR: Sure, but fortunately some of those dumb mistakes were made before YouTube. These days, the YouTube alert antenna is always up.

LEO: Do you feel that stand-up comes from a place of hurt and sadness in the comedian?

BR: That question makes me so angry, I want to make a bomb and destroy … whoo, I better get a grip here. I think comedy comes from all places — dark, light and everything in between.

LEO: At this point in your career, how important is it for you to be on the road?