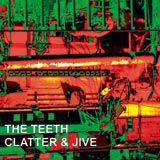 Reviewing EPs can be a tricky proposition — does one afford the same considerations of scope and gravity typically associated with a full-length? If you’re dealing with one of the format’s undisputed masterpieces (Signals, Calls and Marches, Chronic Town) you certainly do, and if Clatter & Jive doesn’t quite reach the heights of those landmarks, it’s still an effective, concentrated blast of energy much weightier than its three-track length would suggest. The band includes Lucky Pineapple guitarist Matt Dodds, but that band’s expansive experimental rock is miles away from The Teeth’s lean, jagged post-hardcore. Best is “Huevos Cubanos,” a down-tempo instrumental that contrasts the band’s other Archers of Loaf-style compositions without stealing their power. Rarely has both a band’s name and the title of their record been so appropriate.