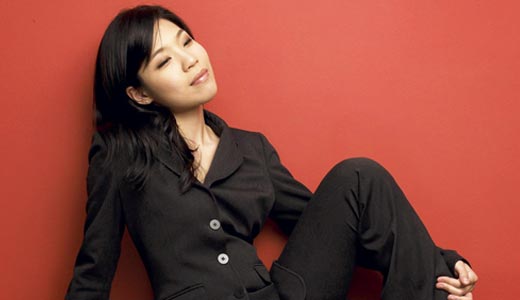 Talking by phone from her home in New York City, Joyce Yang is explaining Sergei Rachmaninoff’s “Rhapsody on a Theme of Paganini” as if she is just about to set the phone down on the piano and play it for you long distance. Just 23, Yang has a lot to say about the music she plays. And how she plays it.

“If I am playing nine notes in a chord at the same time,” she says, “I can pick which one note of those nine notes to bring up to make it the most warm. Or colder. Or maybe … suspended. In Rachmaninoff, there are thousands of possibilities in one soft chord. It’s a lot to think about.”

Yang will perform the Rachmaninoff “Rhapsody” in two concerts Thursday in Whitney Hall with the Louisville Orchestra. The symphony’s program also includes the premiere of a work by George Tsontakis called “Impetuous,” and Czech composer Dvorak’s “Symphony No. 5, From the New World.”

Two weeks ago, Yang was in Louisville for a workshop with students and performed a bit of the Rachmaninoff “Rhapsody” in a concert for the Kentucky Music Educators Association conference. She played just three variations — Nos. 16, 17 and 18 — of the 24 variations that make up the piece. A little sneak preview.

As she began, she drew close to the keyboard and close to the music — soft, darkly complex chords, like ominous nighttime clouds.

“It’s what is so remarkable about Rachmaninoff,” says

Yang. “Within that certain dynamic, soft and sensitive, at a very low volume, there are so many different colors you can create. Just the smallest shades, the smallest notes can direct where the music is going. It’s all these inner voices to explore. Rachmaninoff is famous for his inner voices.”

The Russian composer, who lived much of his life in the United States, selected the theme for his variations from Niccolo Paganini’s “Caprice No. 24.” Yang says the theme holds the work together, but, “within the big luscious lines, there are all these twirly little details you almost don’t hear.”

She explains that the 16th and 17th variations, which she played here previously, are soft moments leading to a climax in the 18th. We had it pictured as nighttime clouds. Yang has her own version.

“It’s like you are going through the dungeon, and then you see the light come out. It starts by exploring something new in the palette of colors. Then the melody comes from almost out of nowhere, and it’s one of the most beautiful melodies ever. It builds up to where the orchestra enters, and we are really swirling in ecstasy by the height of the 18th variation. You are suddenly in this new and wonderful place.

“And then,” she says, “it dies down and ends in pianissimo again.”

But don’t get comfortable.

“That’s only to be interrupted by the 19th variation,” Yang continues. “The interruption is in pizzicato in the strings — the violins, violas and cellos plucking their strings — as if it was a dream, and now you are back to reality in the 19th variation. Then it progresses to a more heightened, hyper, excited state. It builds to almost a frenzy, but a controlled frenzy, and ends in the most striking manner.”