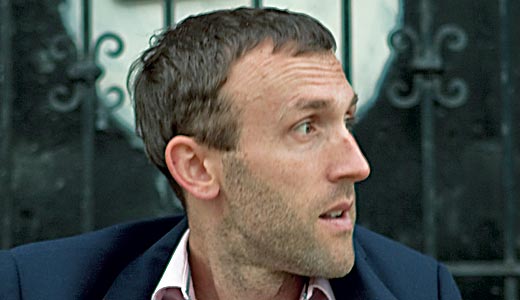 Deadringer, the 2002 debut from turntablist/producer RJD2 (aka Ramble John Krohn), won the Philly-via-Columbus, Ohio, transplant widespread acclaim. In a recent Columbus Alive recap of the decade’s best local albums, friend/rapper Blueprint said RJD2 summarized and furthered the city’s music by “using his knowledge of records and sampling to create something brand new.”

The man behind Deadringer feels differently. “I have a vivid memory of having this stark realization that the most important aspects of making that record were all the things left on the cutting room floor,” RJ says. “You really don’t know how much something is going to contribute or detract from a song until you break it down into the song as a working element. It’s a gamble.”

RJ rolls the dice again with the recently released fourth disc, The Colossus. After learning his art the hard way with Deadringer, he chooses to enthusiastically discuss developing tracks over the tracks themselves. “Prepping a sound to work as an element of a song is a very labor-intensive process,” he says. “When you do all that work, the hardest thing is to make that executive decision that it’s really not contributing to the song. The best way to work is to catch yourself in the labor. Then you’re not invested in having it work, you’re just applying this process and saying, ‘This works, and this doesn’t.’”

This motto in mind, The Colossus is a farfetched bazaar. RJ’s sample-bred sounds don’t need voices to prosper. Instead, he mingles twinkling pop, giddy soul strings and macabre synth straight out of “A Clockwork Orange.”

Opener “Let There Be Horns” is one of RJ’s tightest examples of genre-bumping proficiency. Suave funk transforms into a Middle Eastern beat. He estimates that the 4:09 piece incorporates 20 to 35 samples. Reorganized, those miniscule fragments form a new whole.

“At this point, I only feel comfortable when I’m deconstructing things to a single note,” he says. “It provides me the freedom to essentially use (samples) as a writing tool instead of using loops.”

RJ’s workmanlike process fulfills him. “You end up thinking in terms of rhythm and pitch. I don’t want to think in genre classifications, but it makes it easy to take seemingly disparate elements and make them work. I’ve grown a bigger palette that I can paint with.”