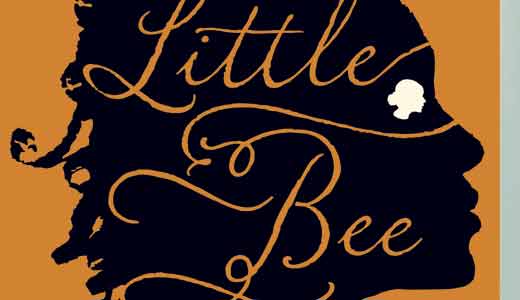 “We must see all scars as beauty. Okay? This will be our secret. Because take it from me, a scar does not form on the dying. A scar means, I survived.”

This is one of the many beguiling and heartrending observations of a teenage girl who has found her way to England in Chris Cleave’s second novel, “Little Bee.” She has given herself a new name and tried to leave behind the unimaginable violence that wiped out her family and her village. But the bureaucratic system that puts Bee in detention does not provide rescue; it hardly functions even as a reprieve.

Sarah is an English journalist who met Bee once — the circumstances then were traumatic, and Sarah has been told to leave that in her past, especially as she adjusts to being a widowed mother. But Bee arrives at Sarah’s door, and the decisions of these characters will jeopardize their well-being — and their consciences.

“Little Bee” has just been issued in paperback, and Cleave is on an author tour that will take him to Carmichael’s next Wednesday. LEO had the chance to speak with him by phone recently, and he opened up about how he came to write about the plight of refugees: “I was appalled at my lack of action when I was faced with asylum seekers once in my life.” While at university, Cleave was given a job at the sort of detention center that is Little Bee’s initial experience once she “escapes” to England. The people he encountered there “had no idea when they would be released or why they were imprisoned. Most of them had fled from horrific situations in the Balkans or in countries like Sierra Leone, which were in the middle of terrible wars. And they were genuine refugees. But my country, Britain, didn’t believe them — and at some point was going to deport them back to these countries that they’d come from.”

For Bee, that will likely result in her murder by those who’d like to keep a dirty little oil war under wraps. But with some luck and pluck, she finds Sarah. The novel plays out with chapters alternating in the voices of the young Nigerian refugee and the British suburban mother. “I wanted to talk about, ‘How far would you go to help another human being?’ And I didn’t want it to be any more complicated than that — and so I sort of had to write two female characters … it was quite daunting to do. But, having done it, I discovered that it really changed me. I’m a different person, because I spent the year that it took me to write this thinking from two women’s points of view.”

Cleave has delivered a riveting, quick read. He provides entertaining drama and moments of humor — but these are realistic characters wrestling with the unfairness of life and the paradoxes of governments. In discussion as in his prose, the author balances pragmatism and passion. His research into where today’s refugees come from, and how they are handled, has him hoping for policy changes that are not naïve and utopian. Countries of potential asylum “can make positive progress. And the populations largely agree with that. People are basically compassionate, and they do understand that refugees aren’t coming to the country for fun.”

LEO: Was it a great concern to be talking in two women’s voices? Some novelists are afraid to cross gender even once.

Chris Cleave: I had to do it, really. Because of the way the story works. When there’s an atrocity, a massacre—like there is in the book—you find that quite often the only surviving non-combatants are women. All the guys that survive are rounded up and forced to join the government army or militia. So they become soldiers, and this isn’t a story about soldiers. It’s a story about a soldier who tries to be free.

So Little Bee had to be a woman. And when she arrives in London, I wanted her to form a very simple friendship with another woman. So there would be basically two straight women, so there would be no sexual overtones to the relationship—because I wanted to talk about, ‘How far would you go to help another human being?’ And I didn’t want it to be any more complicated than that—and so I sort of had to write two female characters. I didn’t think about it too hard. Unfortunately, I don’t think too hard in advance about my writing. And then I find myself in over my head, and so I just have to become a better writer each time.”

So, yeah, it was quite daunting to do. But, having done it, I discovered that it really changed me. I’m a different person, because I spent the year that it took me to write this thinking from two womens’ points of view. It’s been one of the most interesting experiences of my life.

LEO: You acknowledge the degree of challenge in taking on events in the world that are so far removed from your home situation. Failing at an important moment, and then having to struggle to see if you can move forward—that’s what happens to the character Andrew [Sarah’s husband] in this novel. Do you know of [writers] who write after they come to a challenge that they haven’t been able to face—so that they’re readdressing it with their writing?

CC: The character in the book that I most closely resemble is Andrew, but I’m not suffering from depression. I did write the book because I was appalled at my lack of action when I was faced with asylum seekers once in my life.

I was about 12 years ago. I was a student and in the summer holidays from university I would take on paid work…any paying job of casual labor. One of the jobs that I got was in the kitchen of an asylum detention center just outside Oxford. I worked there three days. Cooking and serving food to refugees who had been imprisoned in this place. I found it absolutely shocking that these people were detained—because they hadn’t committed a crime. They had no idea when they would be released or why they were imprisoned. Most of them had fled from horrific situations in the Balkans or in countries like Sierra Leone, which were in the middle of terrible wars. And they were genuine refugees. But my country, Britain, didn’t believe them–and at some point was going to deport them back to these countries that they’d come from. Which was extremely unfair and probably illegal—to imprison people like that who’ve committed no crime.

I was incredible upset by what I saw, and by the conditions in that place. And yet, I did nothing. I just allowed myself to be quietly freaked out by it. I took the money that they paid me for working in that place—and therefore became part of the system. Even though it was only three days, I’ve felt guilty about that for nearly twelve years afterwards.

I should’ve just not taken the money, and not done the job, and walked out and said ‘I think this is wrong.’ But I didn’t. I decided I needed the money. And that’s been eating away at me ever since. And one of the reasons that I wrote ‘Little Bee’ was that I thought I should have done more at the time to make a stand and say, ‘I don’t think this place should exist, and I think the way we’re treating these refugees is wrong.’

LEO: Is there a model for treatment of refugees that you’d like to see put into wider use?

CC: There are different models that I think are fairer. I think most countries have an idea that they’ll have a quota of people of people that they can accept as refugees, and I think that’s fair. I don’t think that any one country can accept the refugees of the whole world and still be a stable country. I think there has to be a number set.

But I think there are a number of countries that do it much more effectively, and with a greater degree of fairness. I’m not going to say that one country is better than another—because I think that’s not for me to say—but what I will say is two things:

The first is that a country can become fairer in the way it treats asylum seekers. I would use the example of Australia, which, about 5 years ago was unbelievably brutal and unfair toward refugees. There is a famous case where a shipload of refugees arrived off the coast of Australia, and the Australian Navy didn’t even allow that ship to land. And it was incredibly hot, and a lot of people on that boat became ill or even died—including children—because they weren’t even allowed to make landfall. That incident was so brutal, and was thought to be so repressive, that the Australian public did wake up to the fact that it was very unjust. Now that country has slightly reformed its treatment of refugees. It processes them quicker, and gives them decisions on whether they’re allowed to stay or not much quicker.

So, countries can make positive progress. And the populations largely agree with that. People are basically compassionate, and they do understand that refugees aren’t coming to the country for fun; they’re coming because they’re fleeing something.

The second thing I would say is that I don’t think that liberal-leaning people like me should make it everybody else’s problem to pay for refugees to be looked after and to be kept. One of the arguments that’s made against accepting more refugees and asylum seekers is that it’s very expensive for the state. I agree with that—and a solution that I really favor is for people to be allowed to adopt an asylum seeker or a refugee, and to sponsor them. The cost of doing that goes onto private individuals who volunteer to sponsor a refugee, rather than onto the state. That seems to me like an issue of freedom and of personal choice then. So if I decide that I want to sponsor someone who, for example, comes from Nigeria, then I think I should be allowed to do that. And to say, “I will look after them, they will have a roof over their heads, I will help to feed them, I will help them to learn any languages that are necessary, and I will help them to go to college or to find a job or whatever, and you would become their guarantor. In return they would be allowed into the country, and it wouldn’t be a burden on the other taxpayers.

So, for me, the solution that I would favor is that the people who want there to be more compassion for refugees would be able to basically put their money where there mouth is, and to basically sponsor one the same way that you can adopt a child. That would be my solution; I think that’s a positive and helpful solution. I think it respects the people who don’t want to pay for more refugees and asylum seekers to be allowed into the country.

I think it respects everyone.