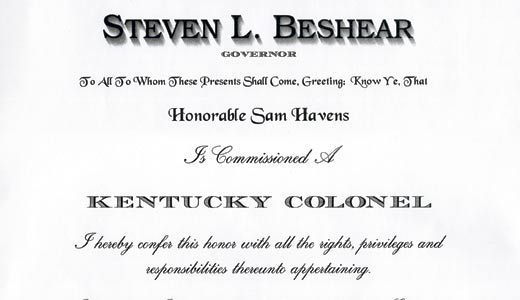 Who said writing for a free weekly newspaper wasn’t prestigious, besides my mom? Apparently some people in this fine state think I’m special, and not in the Olympic kind of way. The Bar Belle has achieved the highest honor awarded by the Commonwealth of Kentucky — and I didn’t even have to hike my skirt at Porcini. Gov. Steve Beshear has appointed me a member of the Kentucky Colonels, an exclusive club whose purpose is to aide and promote the commonwealth and its citizens. Basically, I’ve become an ambassador for Kentucky — probably due to my love of bourbon.

According to my new club’s website (kycolonels.org), the organization began in 1932 and is rather exclusive when it comes to who they allow in. “The Honorable Order of Kentucky Colonels does not appoint or commission Kentucky Colonels,” it says. “That can only be done by the sitting Governor of the Commonwealth. Only the Governor knows the reason for bestowing the honor of a Colonel’s Commission on any particular individual.”

I am proud to add my name to the list of famous Colonels, which includes (and I’m not kidding): Ashley Judd, Betty White, Bill Clinton, Bob Barker, Elvis Presley, Johnny Depp, Tiger Woods and Whoopi Goldberg.

To become a Colonel, you have to be nominated by a Colonel. And I just so happen to share my Back Door happy hour table with one such Colonel — my friend Sue. Over a glass or two of gin, err … I mean fine Kentucky bourbon … I professed to her my love of this state, and how I’ve tried to shake off my vanilla Ohio habits. Sue looked at me proud, like a mama bird that tosses her kids from the nest, and said, “I’ve got an idea.” After we ordered wings and fries, she said, “I’ve got another idea — how would you like to become a Kentucky Colonel?” “Will they tell me all 11 ingredients?” I asked. “Not a KFC Colonel, child,” Sue quipped. “A Kentucky Colonel — an exclusive, selective club.”

So as soon as she got home and watched the latest “Survivor,” Sue wrote me a nomination and sent it up the food chain. Here’s some of what she had to say:

“Sara is the embodiment of a good will ambassador for the Commonwealth. As an Ohio native, Sara moved to Kentucky and found a true home. … She loves this state and will promote it wherever she goes … she will make a tremendous Colonel.”

As a proud Colonel, I’m trying to figure out what I need to change to embody all that is Kentucky. Does this mean I have to cheer for UK over Ohio State? Make Horse Balls instead of Buckeyes at Christmas? Listen to bluegrass instead of jambands? Embrace my curves and let go my flatness? Drink sweet tea instead of pop?

I just have one small glitch I’ve encountered in this process to be the best Kentuckian I can be. You see, when I received my official, signed certificate last week, there was a slight typo.

“To all to whom these presents shall come, greeting: Know ye, that Honorable Sam Havens is commissioned a Kentucky Colonel. I hereby confer this honor with all the rights, privileges and responsibilities thereunto appertaining.”

First of all, I was unaware that Shakespeare was commissioned to write the Kentucky Colonel certificates. And secondly, umm … Sam Havens? Perhaps copyediting is more of an Ohio pastime than a Kentucky one. Pass the bourbon.

•Its ok. Bourbon kills everything, even the feelings stuffed deep inside

•Who is this blue jesus you speak of?

•My sinuses are clogged from laughing

•i dont cheat!! i experiment.