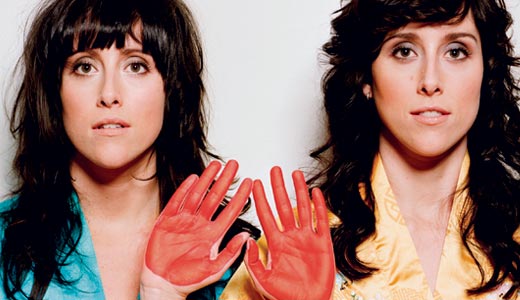 Watson Twins fly in from New York for a 5 p.m. in-store performance Feb. 9 at ear X-tacy.

In September 1979, a singer named Steve Rigot, guitarist Alex Durig, Albert, Durig’s 15-year-old brother and bassist, and drummer Steven Jan Humphrey recorded six songs at Real to Reel Studios in Louisville. They released four — “Process of Elimination,” “The Defectors,” “They’re Guilty” and “Circumcision” — on their own label Tuesday Records. Mike Bucayu released the other two, “White Glove Test” and “Trick or Treat,” as a single on Self Destruct in 1991. The 45 is long out of print. On April 20, The Endtables will be available from Drag City on LP ($14), CD ($12) and mp3 ($9.99), and will also contain recordings of seven live songs.

Endpoint
May 15 is the date of Endpoint’s reunion show/benefit for Jason Noble. The lineup will also feature reunions by Crain and Crain’s predecessor, Cerebellum. A venue has not been determined yet. Endpoint singer Rob Pennington said the show will not feature every member of the band throughout the years, and that rehearsals are scheduled to begin in March.

Appalachian Love
Kentuckians for the Commonwealth hosts a concert Saturday, Feb. 6 at The Green Building (732 E. Market St.) as a warm-up to “I Love Mountains Day.” More than 1,000 members of KFTC will march on the state capitol in Frankfort to help draw attention to the environmentally destructive practice of mountaintop removal mining. Lineup for “Appalachian Love”: Catherine Irwin, The Obscure Handsome Brothers (Joe Manning, Nathan Salsburg, Glen Dentinger), Thomas A. Minor and The Picket Line, Relic and Kate Larken from Public Outcry. Doors open at 6 p.m. Music starts at 7 p.m.

Watson Twins
Watson Twins are flying in from New York to perform a free in-store show at 5 p.m. Tuesday, Feb. 9 at ear X-tacy (1534 Bardstown Road, 452-1799) to celebrate the release of their new album, Talking To You, Talking To Me.

Music ’Cast
We are honored to have Paul Kopasz in our offices to talk about his new record, Gavage Vol. 1: The Queen of Hearts. Listen at Bluegrass Catastrophe, bluecat.leoweekly.com.