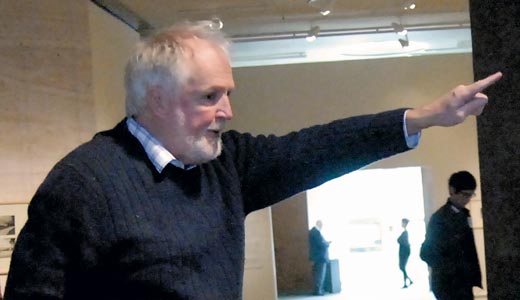 I have to admit this one almost slipped by me.

The Kentucky School of Art, at 710 W. Main St., is the dream of Churchill Davenport. A feasibility study was launched in 2008 with the goal of finding out if Louisville could support an art school reminiscent of the now-defunct Louisville School of Art.

I confess I thought they were still involved in the feasibility study, being conducted by AMS Planning & Research, the same people who did the Cultural Blueprint. Turns out the art academy is almost up and running, with the bachelor of fine arts degree program slated to begin its first semester in fall 2010. Until then, they’re working behind the scenes and trying to get their name out.

The title of the school is still in flux, morphing from the Kentucky School of Contemporary Art to the Kentucky School of Art (KYSA). Davenport, now the school’s director, with a master’s degree in fine arts from Yale and teaching experience at the Pratt Institute and Maryland Institute College of Art, thinks the acronym may change to KSA when everything is finalized.

They certainly have big dreams and plans. “People don’t know what we’re going to do for the city yet,” says Kasey Maier, administrative director. “We want to be a community center; we hope they need us and we need them.”

The proposed curriculum of the four-year college is based on a foundation year, with classes in drawing, design and art history. “We’re focused heavy on studio work,” Davenport says. “That will make a program that’s exciting, enthusiastic. Education is exposure.” Part of that exposure is the chance to study in Italy and intern in New York City.

“What I hate is if someone comes to us and doesn’t have the money to attend,” Davenport says. “So we’re building scholarships. This school is for everybody. Diversity is my biggest goal.”

KYSA will be at their current location by 21c Museum Hotel for a couple more years. Ultimately, they hope to have their own building downtown.

What they are doing now, before they officially open, is introducing themselves to the community. Davenport has been talking to their target audience — local high school students interested in art. Short-term classes are offered in art appreciation and studio.

Visiting artists are a crucial part of the plan as well. Dan Dutton was at the school in November, and Judy Pfaff will be there Feb. 26-27. Future visiting artists will include Morgane Tschiember, Bill Bailey and Barry Nemett. The school is also presenting a forum with the mayoral candidates. The focus of the forum — led by David Cupps, executive director of Arts Kentucky — will be on the arts. The free event will be at the Kentucky Center on Monday, Feb. 8, from 6-8 p.m.

If you’re interested in learning more about the Kentucky School of Art, there will be open houses on Saturday, Feb. 6, from 12-2 p.m. and Wednesday, Feb. 17, from 4-6 p.m. Call 618-4600 or visit www.kentuckyschoolofart.com for more info.