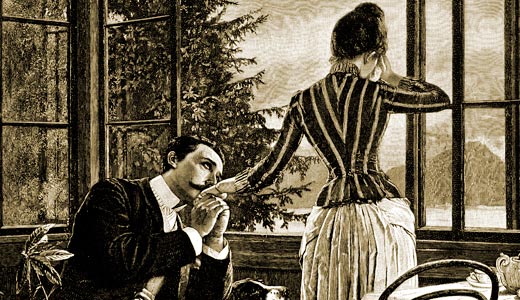 That we live in a culture in love with being in love, there can be no doubt. The vast majority of film and television plots, the lyrics to countless popular songs and the very existence of the PajamaGram revolve around this tricky, clichéd and often-abused four-letter word.

Which is odd, because love’s causes — and effects — remain largely a mystery to our love-crazy culture. You’d think we’d have it demystified by the 21st century, but the perseverance of Julia Roberts films and Mariah Carey singles have conditioned our understanding of romantic displays to eschew those that don’t involve holding a boombox outside your beloved’s window, poaching their pet rabbit in a pot of boiling water, or anything else rooted in reality.

And love’s true nature, as it turns out, is something akin to insanity.

The chemical cocktail released into the body’s bloodstream via the adrenal medulla and hypothalamus regions of the brain, which usually happens somewhere around the fourth date, is overpowering: dopamine (integral to the pleasure response); oxytocin (a hormone released during orgasm that increases contentment and reduces anxiety); vasopressin (another hormone, secreted during intercourse, which reinforces emotional bonds); and serotonin (a neurotransmitter produced in the gut), among others.

It’s chiefly serotonin — whose function in the human mating ritual is to suppress natural urges of appetite or self-preservation in lieu of, say, pursuing a smoking hot cavewoman across a lava flow — that creates the chemical foundation for obsessive-compulsive disorder. Did you forget to eat because the object of your desire is just so damn beautiful? Chalk it up to the serotonin. It’s also why you keep following that girl home from the bus stop and why you haven’t showered in days.

The result of these competing hormones and neurotransmitters during the initial phases of courtship can result in a period known as limerence, whereby sufferers undergo extreme emotional oscillations: One minute you’re discussing which shade of robin’s egg blue would best match your hypothetical baby’s room, and the next you’ve left 16 breathless messages on their voicemail. If this sounds like bi-polar/dissociative personality disorder, that’s because it kind of is.

What’s more, the accepted psychological model for love — Robert Sternberg’s “triangular theory,” which posits various combinations of intimacy, passion and commitment — contains more potential for duds than fireworks: Of the seven possible combinations under this theory, only two (consummate and romantic) can scratch that Nora Roberts itch lurking deep within our psyche.

As much as love represents little more than a radical altering of brain chemistry, there has to be some purpose to it other than causing humans to act crazy. The fact remains that billions of people on the planet are experiencing the sensations of a lover’s touch, coo or sext message right this very second, yet somehow our species hasn’t destroyed itself yet; if love were nothing but pure insanity, then how are we still here?

Because a growing body of evidence in the field of evolutionary biology suggests love — and the resulting monogamous relationship — proves integral for survival of the species. Some of the very chemicals listed above promote long-term attachment to another mate in addition to suppressing fight-or-flight responses. Mates that successfully pair (i.e., they made babies) have done so via successful courtship, which is itself the result of interpersonal communication skill-sets that have developed as a result of our need to reach out, touch someone and impregnate them.

But it is the capacity to feel and reciprocate love, despite its inherent zaniness, that might be the most important evolutionary trait of all. An ovulating female is more likely to select a long-term mate if that potential mate exhibits the necessary levels of empathy and compassion to reciprocate love, making him much more likely to pass his genes along via a primordial bump-and-grind.

Our notions of love evolve along with our society, and so long as our current pharmaceutically minded, quick-fix zeitgeist doesn’t supplant this messy but necessary chemical reaction with an iPhone app, we may yet prosper for another few million years more.

Dating is tough for men, too

I have a date!