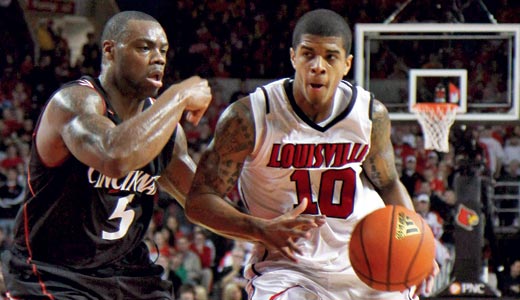 It starts with a little cat and mouse game out near the three-point line.

Louisville center Samardo Samuels comes out to join guard Edgar Sosa for a little back-and-forth two-step called the “pick and roll.” It’s an age-old basketball offense designed, in this case, to spring Sosa or Samuels for an easy shot near the basket.

Of course, the pick and roll is far from Louisville’s only offensive weapon. But it’s new for this team and emblematic of the way the Cardinals have shrugged off a previously lackluster season — and a series of close losses — to launch what they hope is a full-throttle February run. Louisville (15-8 overall, 6-4 Big East) is looking for a berth in the NCAA tournament — with the notion of doing some damage when it gets there.

ESPN analyst Jay Bilas, who has seen Louisville throughout the season, rates the Cards stock as a “buy.”

“Look at the games they’ve lost, they were one-possession games,” says Bilas. “You can sit and argue the (referees’) calls, and what would have happened if the calls had gone the other way. But the quality of Louisville’s performance was very good. They’ve got good opportunities down the stretch, and this is a team, with their depth, and their guard play, and a good scorer inside, there’s no reason they can’t come on and be a good NCAA Tournament team.”

If that happens, Louisville’s mid-season installation of the pick and roll could be a big part of the reason why.

Here’s how it works:

First, as Samuels and Sosa begin the play, Louisville’s three other players vacate the middle of the court, taking their defenders with them. That leaves space for the pick-and-rollers to operate. Samuels sets a “pick” on Sosa’s man. If things work right, the pick holds up a defender just enough to spring Sosa for a lightning drive to the basket. Meanwhile, Samuels “rolls” away from the pick and heads for the basket himself — and suddenly Louisville’s two best scorers are in business.

“I love it,” says Sosa. The senior guard rang up 15 points, plus eight assists against Connecticut last week, then scored 13, with another eight assists, against Rutgers.

“Once you get in the lane, you know the bigs are going to come try to block your shot — that’s what they pride themselves on,” says Sosa. “So guys like me and Jerry (fellow Louisville guard Jerry Smith) just try to get it in there and make plays. Not necessarily to score, but get it in the paint, get their big guys to leave their feet where we can dish to the corner for threes or dish to the big men.”

In the past, Samuels was routinely double-teamed. In the pick and roll, he’s usually matched against just one defender.

“And sometimes when they switch, I end up with a smaller man on me,” he says, with a big grin broadening across his face. “Then it’s just one dribble and a long step to the rim.”

Sounds so simple. Why doesn’t everybody do it all the time?

They do, in the NBA, where zone defenses are strictly prohibited. It’s the pick and roll that frees up stars like LeBron James and Kobe Bryant. Louisville can use it because the Cardinals kill zones, and because Samuels and Sosa have the skills.

“Sosa is very good at it, and Samuels is learning — he’s getting better at it,” says Louisville coach Rick Pitino. “There are certain guys who are pick and roll people, and there are other people who spot up well off the pick and roll.”

So when Pitino calls for the pick and roll, he generally has a couple “spot up” players in the game to bomb threes out of the corner and off the wing. Like Reginald Delk and Preston Knowles. The three-point threat keeps the guys guarding Delk and Knowles from wandering away to help out with Sosa and Samuels. The fifth man in the thing is 6-9 sophomore Terrence Jennings, who is dangerous near the basket.

“A pick and roll looks like a two-man play, but five people have to be in the right place to make it work,” says Pitino.

All this began to unfold in January.

Former U of L player Chuck Nalevanko thinks the pick and roll is perfect for Pitino’s current players.

“It’s a quick-hitting offense, which I think is what Pitino wants now,” explains Nalevanko, who spent years coaching basketball at Seneca High School. “It’s very simple. The players don’t have to run through all those screens and passes, which they weren’t very good at anyhow. It opens up the floor for more penetration from Sosa, and Jerry Smith and Jared Swopshire. It takes advantage of their slashing abilities. And I think if you’re going to play Jennings in there, that keeps the big man guarding Jennings a little closer to him, and opens up the floor even more. If his guy shades over to help on Sosa or Samuels, Jennings is going to be open — and he’ll clean up on the glass.”

“I think they run a lot of good stuff — flares, pin downs, screens, fades — it all looks good when it goes in the hole,” says Raftery. “And they’ve got a perky attitude.”

“February is a big month for them,” Raftery adds. “They’re a tough team to play against. So disruptive. You’ve got to be on your game totally to win against them. They’ve gotten a few nicks along the way, but the league is like that. I think sometimes when you get beaten up a little bit, that’s the response you want. It tells you something about these kids.”

The nicks came in last-second losses to Pittsburgh, Seton Hall and West Virginia — all games it looked like Louisville would win, but didn’t. (Louisville’s 92-84 overtime loss to Villanova is different. The teams committed 67 personal fouls, and looked like they didn’t mind doing it. There were 94 free throws shot — 45 by one team and 49 by the other. That may be the Big East, but it is not basketball. The coaches both ought to be docked a game’s pay. Make the players listen to a week of country music. End of sermon.)

Anyhow, Louisville seems to have survived those nicks.

“Those games, it showed we can play with anybody, that everybody is not better than us,” says freshman guard Peyton Siva. “Coach Pitino was telling us that they had to make a little run to get in the tournament when (former guard) Andre McGee was a sophomore, had to win nine straight. We’re not in that predicament, but we’re close on the ropes. Right now, we’re just trying to be like Ali and do a little rope-a-dope and keep fighting.”

“I like the way we’re playing now,” says Pitino. “I think (people) expected them to hang their heads a little bit, and they haven’t. They’ve come out with a ferociousness. And they’ve handled it the right way — with a little bit of a chip on their shoulder.”