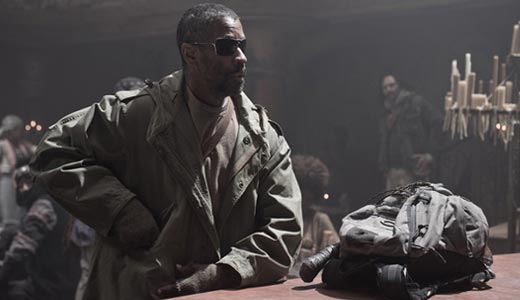 As evidenced by “From Hell,” the Hughes Brothers’ fourth feature film, leaving audiences cold doesn’t necessarily indicate a killer movie. The directing tandem fell off the radar following that ’01 release, their only measurable blip since execs on the USA Network’s “Touching Evil.” That short-lived crime drama is now included in the “Brilliant But Cancelled” DVD series, which feels somehow like a metaphor.

Throughout their careers, the Hughes have shown glimpses of the promise displayed in “Menace II Society,” their incredible debut. And, in our current period of managed expectations, we should be happy for their return and the very watchable “Book of Eli.” Is this a film I’d pay to see if it didn’t feature two name directors? Probably not. Has the story stayed with me since last Thursday’s advance screening? No, not really. Was I effectively entertained while sitting in the packed house? Mostly yes, and I think you’ll be, too.

Despite treading territory covered in countless dystopian action films, “Eli” possesses traits that do set it apart. Chief among them is the performance of its leading man, Denzel Washington, who still seems capable of just about anything. The 56-year-old star of the heady “Philadelphia” and “Malcolm X” was never out of his element tangling with apocalyptic cretins in 20-versus-one fight scenes. This may be in part because the character of Eli is written in his 50s, displaying somewhat atypical action-hero qualities. Yes, Eli can kick your ass, but it’s his restraint, unexcitability and faith that are most important in guiding him toward his goal: protecting the intensely coveted and last known copy of the Bible.

The film’s spirituality is another surprise. “Eli” puts forth doctrine without being preachy or impeding its narrative. The film’s religious notions are two-sided; scripture is promoted, but its corrupting force is also presented. The thesis here is not so much that civilization requires the word of God to survive as much as it just needs words — stories, history, culture. When describing life before “the flash,” Eli mentions people who had too much and disposed of what was precious (i.e. us). Those in charge of getting mankind back on track collect whatever was once important — lessons already learned but forgotten. That’s where the Bible comes in (along with the Torah, Koran and complete works of William Shakespeare).

That said, this is not exactly a profound film. When I thought too hard about the things I liked, those elements tended to fall apart. For instance, in a world where water is sparse and soap virtually non-existent, KFC handi-wipes as currency is a clever concept. Recalling how those towelettes tend to dry out after an August in the glove compartment, I can only imagine their usefulness would be somewhat compromised 30 winters into a nuclear event.

So, enjoy “Eli.” Just don’t think about it too long afterward.