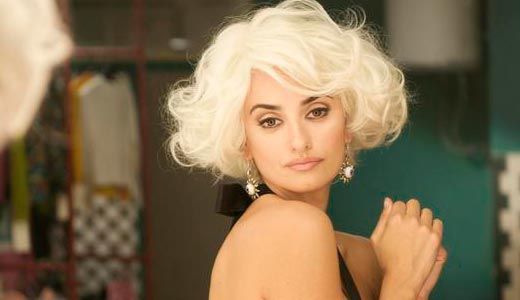 Spaniard Pedro Almodovar is probably both the most respected and most taken-for-granted director not working in English. He received a foreign language Academy Award a decade ago for “All About My Mother” but has produced movies that are every bit as entertaining, witty and heart-breaking in the last decade, albeit without anymore Oscars.

Inferior directors get a lot of hype without surpassing even Almodovar’s lesser movies. Like Woody Allen or Martin Scorsese, he has to compete not with what else is in theaters, but the persistent images of his greatest films.

Caine can’t immediately place Ray X’s voice, but he eventually puts it all together: Ray X was complicit in the series of events that lead to his blindness. Largely, these events revolved around the achingly beautiful Lena (Penélope Cruz), whose story is told in flashback.

Alas, there are many more subplots — about Ernesto’s passion for Lena, as well as the dutiful support of Caine’s producer, Judit Garcia, and her son, Diego — so many that the film’s last half-hour really needs four or five consecutive conclusions to wrap everything up. And still there are unanswered questions when the credits roll.

Like many of his movies, “Broken Embraces” has a Russian doll quality: Layers and layers of soap opera-esque stories of love and sacrifice come together for one overarching shape. But inevitably, with so many plots, some will be less interesting than others; make too many films-within-films, and eventually those films are competing with each other. A cohesive, successful movie becomes almost impossible.

When the lights came on after “Broken Embraces,” I remember thinking that this is, at best, an average movie by Almodovar. And that was because I was comparing the most arresting parts of the film — mostly those involving Cruz — with the plots that are merely good.

But I went to bed that night turning the images around in my head. And I woke up the next morning putting the pieces together. And the same thing happened the next night. Somehow, miraculously, and in a way few directors can pull off, this became a wonderful film.

I suspect it’s like the phenomenon of when you cram for a test all night, but don’t get it until you wake up in the morning. “Broken Embraces” is a movie about movies, about their ability to memorialize and smear, how they can elevate and degrade, how actors (and, in Almodovar’s world, all women) can either mislead or reveal. Although it’s presented in such a strange, disjointing way — not at all unlike a series of short stories by Borges — it gives you something to puzzle over for days. There’s a lot here, much more than the two hours of film that shows up on screen, and Almodovar trusts that he and his actors are good enough that it will stick with the viewer long enough to work its way through your subconscious. And you know what? He’s right.

Ho hum. Another year, another fantastic movie by Almodovar.