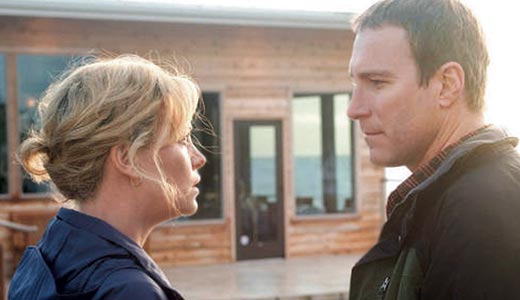 The very definition of epic drama (and, frankly, one seriously chicky flick), this rises above through flawless casting and a perfect script. The stars include Charlize Theron as a woman who decides to face her inner demons, many of them the fault of her mother, Kim Basinger. From there, the film becomes somewhat non-linear, exploring past indiscretions, extramarital shenanigans and present-day mistakes-in-progress. Local-gal Jennifer Lawrence is excellent, holding her own among some of the best actors working today. Never openly weepy, but an emotional powerhouse nonetheless.

A welcome quartet of widescreen blaxploitationers starring Jim Brown, Jim Kelly, Fred Williamson and Rockne Tarkington. The least known of the four, Tarkington, stars in “Black Samson,” a greatly underappreciated actioner with Rockne as a Harlem bar owner with a pet lion. Big Jim Kelly — Williams from “Enter the Dragon” — appears in the remaining three films: “Black Belt Jones,” “Hot Potato” and the sublime “Three the Hard Way.” Born in Paris, Ky., Kelly moved to less-civilized Lexington after his freshman year at U of L, where he quickly learned karate in order to survive on those mean, horse-dung-covered streets.

BY THE PEOPLE: THE ELECTION OF BARACK OBAMA

This HBO doc is a pandering bit of fluff, obviously marketed toward the black community with an eye on the corporate bottom line (hence the outrageous sticker price). That being said, it is also a stirring and well-made time capsule of a truly historic event: the election of the first non-100-percent-white president of the United States. We’ve often lamented that the current generation has no touchstone — no moon-landing, no Woodstock, no ousting of a corrupt president — but they do have something we didn’t: proof that anyone can be anything they want to be in America. Inspiring.

A master musician, unexpectedly unemployed, finds a new and embarrassing career: playing ritual music for mourners during pre-cremation ceremonies. Sound dull? Not on your life! Coming to terms with his new role as an “encoffineer,” its effect on his family and the community at large are just a few of the surprises. One terrific little flick.

Lame and unnecessary remake of the excellent 1980 film set in a school for musically inclined young people. Nothing to recommend here; ask for the original.

Rob Zombie’s follow-up to his “re-imagining” of the Michael Myers slasher franchise. While we appreciate Zombie’s enthusiasm for the material, we still prefer the original. Fans will appreciate the bonus goodies, including music videos by Captain Clegg and the Night Creatures, and stand-up routines by Uncle Seymour Coffins.

The U.S. president confides in the UK Prime Minister, “You know, a war would be great for our careers.” Army brass and British politicos don’t think it’s a good idea, but when one accidentally makes a case for battle on TV, it’s up to the U.N. to get things under control. Meanwhile, Judy, a low-level civil-service grunt, becomes the most influential person in the world, despite a job that has her dealing with voters’ clogged drains. Possibly the best political satire since Slim Pickens rode the bomb in “Dr. Strangelove.”

Parents with cable TV already recognize this from “The Sunny Side Up Show,” the backbone of the 24-hour preschool channel, Sprout. Hosted by Kelly and Chica, it weaves together Barney, Bob the Builder, Thomas the Tank Engine and other kidvid favorites with make-it-at-home segments to teach basic rugrat lessons in caring, doing and paste.

Sam Rockwell is excellent in this all-but-one-man indie sci-fi tale of an astro-miner, coming to the end of his three-year contract working alone on the dark side of the moon. His only companion is a HAL-like computer (voiced by Kevin Spacey) and the occasional video from his wife and family on Earth. But then an accident leads him to discover another lunar resident. To say more would deprive you of a truly wondrous experience. All we can say is, “See this immediately.” One of the most intelligent sci-fi movies of the last two decades.

A minor Japanese mafia boss imagines himself a Samurai, sworn to a code of chivalry, yet obedient to the demands of his evil, murderous godfather. One of Japan’s most decorated films from its premier director, Hideo Gosha.

This savage spooker from Argentina explores the fate of more than 30,000 people kidnapped, tortured and murdered by the military junta between 1976 and 1983. An adult brother and sister come together to see their dying father. Along the way they discover an old diary recounting the family’s actions during the junta’s reign of terror … and that night the terror returns to kill again. Excellent.

The fabulous Kathryn Bigelow (“Near Dark”) directs what is, in our opinion, the greatest anti-war war movie since “M.A.S.H.” An Army bomb squad spends their days finding and defusing IEDs in Iraq. The job is impossible, tedious and mind-numbingly routine. It is also quite deadly. With each step possibly being their last, the crew develops a comradery based on gallows humor and the knowledge that the only thing standing between themselves and death is the guy in the next seat. A unique and profoundly entertaining film; our highest recommendation.

THE SIMPSONS: THE COMPLETE TWENTIETH SEASON

Four DVD discs or two Blu-ray, each with 21 episodes and bonus goodies. What more could you possibly want to know?

TYLER PERRY’S I CAN DO BAD ALL BY MYSELF

Yet another of TP’s lame, self-referential black-family potboilers. If you liked the last one, you’ll like this one.