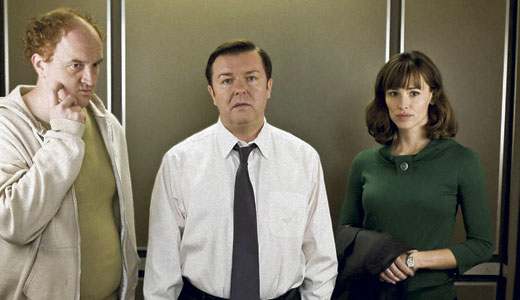 THE INVENTION OF LYING

Only the incomparable Fred Olen Ray (“Hollywood Chainsaw Hookers”) could have dreamed up this wonderfully ass-inine skin flick/monster movie. Jayden Cole plays the titular (wink, wink) red-headed construct of a crazed scientist with no money to spend on clothes. Never ask this guy to “dig up a date.” (Barrumpa!) Ray stalwart Christine Nguyen (soon to be seen in “The Green Hornet”) provides the necessary lesbian licks. Also newly available: “Twilight Vamps: Lust at First Bite.”

THE INVENTION OF LYING

This Ricky Gervais outing — where he’s the first man to discover how to lie in a world where everyone always tells the truth — is priceless. Hell, the bit about telling a babe on the street: “The world will end unless you have sex with me right now!” is worth the price of admission. To be honest, the movie works best when it’s just Gervais and his victim on the screen; the additional stars and cameos (Jennifer Garner, Louis C.K., Jeffrey Tambor, Tina Fey, etc.) just slow things down, but there’re more laughs in 10 minutes of this flick than in all of most Hollywood “comedies.” Would we lie to you?

Hilary Duff proves that she’s more than just nubile nookie in this drama that’s quite heavy for PG-13. She plays a would-be suicidal teen forced to spend the summer with her grandparents, far from friends and cell phones. Surprisingly good; with Ellen Burstyn, Melissa Leo and Michael Murphy.

CLOUD: CHALLENGE OF THE STALLIONS

Third outing in Nature’s “Cloud” series, following the true-life adventures of a wild stallion, born on camera in 1995 and recorded continuously by wildlife filmmaker Ginger Kathrens.

DEEP IN THE VALLEY

This teaser-porn outing has lots of sex-talk and just a bit of skin — but not in the cameos by named “stars” Denise Richards and Kim Kardashian. Also of note: appearances by Christopher McDonald, Tracy Morgan, Charlotte Salt from “The Tudors,” stunning Rachel Specter and Kate Albrecht from “Entourage.”

In usual broadcast-TV fashion, FOX tries to copy “Lost” while claiming “originality” by moving it into outer space. That’s a shame, because the basic premise of this show — that the biggest challenge facing manned spaceflight is the emotional instability of humans — is far too exciting to be bogged down by layers of trivial conspiracy and hokey mystery. Features a great cast and some of the most realistic space hardware ever seen on TV.

A pair of lovingly inept Mexican horror films from the very beginnings of that industry, circa mid-1950s. Antonio Espino Clavillazo stars in both; in the first, he’s a cowboy fighting vampires at a haunted castle, and in the second, he’s an astronaut heading for the moon. Both are simple, fun, ridiculous and wonderfully imaginative. Recommended.

This big-budget sci-fier occasionally strives for “Rollerball”-like gravitas but is just a simple vid-gamer at heart. Stars Gerard Butler as a pawn in an online game where real humans hunt and kill other real humans for points. With sexy Amber Valletta, Michael C. Hall as the game mastermind, Kyra Sedgwick and Alison Lohman, all of them pretty much wasted.

KINGDOM OF THE SPIDERS

This goofy toon is both a dictionary of every cliché in the anime handbook and an original treatise on how to assemble the elements of the perfect story. Confused? Check out the tale of Kouichi, whose encounter with the naked Emi leaves him with great power … which he uses to become the world’s biggest jerk!

A wonderfully nasty doc from the maker of “This Film Is Not Yet Rated” (which we also highly recommend) about closeted homosexual U.S. politicians who actively campaign against gay rights. The reasons are as outrageous as their own hypocrisy.

Dennis Quaid and Ben Foster are the only recognizable names in this outer-space Euro-shocker about a crew awakening from hyper-sleep with no knowledge of who they are or what their mission is. Worse yet, they don’t seem to be alone on the ship. Not the greatest movie ever made, but we were entertained.

Tom Macy stars as a writer in the midst of a nervous breakdown in this gay-themed psychological drama, modeled on the classical myth of Proteus wherein a newly formed man searches the cosmos for the meaning of his own existence.

Steven Seagal stars in his 34th feature film. Hey, give the guy an award! He’s done more with less talent than anyone we know (besides ourselves). Here he’s once again an ex-cop caught in a web of blah blah blah. Co-stars Lexington boy Luce Rains, with good-lookin’ Kisha Sierra as “the girl.”

Most people are unaware that punk music got its start behind the Iron Curtain. It was there — in the illegal dance clubs of East Germany, within sight of the Berlin Wall — that both punk and glam rock arose in rejection of the stifling conformity of socialist life. This doc features rare footage from those days and even rarer interviews with the bands that started it all.

We must be the only guys on the planet who liked this Kate Beckinsale-in-fur thriller set in Antarctica. She’s a U.S. Marshall investigating the first-ever murder there amid 120-below-zero temps and 100 mph winds. And she has only days to solve it before being iced-in for six months with the killer. What’s not to like?