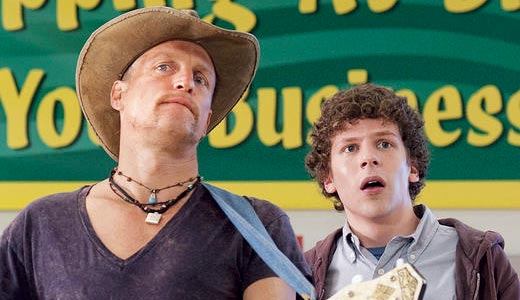 Completely over-the-top comic take on walking-dead lore with Jesse Eisenberg learning to survive a world of flesh-munching rotters under the tutelage of ace Romero-ite Woody Harrelson. Into their carefully un-orchestrated killing spree comes Emma Stone and Abigail Breslin, certainly enough to keep any pair of guys off their game. How can the boys survive the Holocaust with all this distraction? Head-bashing hilarity with Bill Murray as … himself! Priceless.

This over-romanticized biopic on Amelia Earhart gives you painfully little of the real aviation pioneer who vanished during her solo circumnavigation attempt in 1937. Instead you get the soapiest, sappiest collection of girlie cinematic set-pieces imaginable: Earhart as a spunky child in Kansas; Earhart deciding, “I’ll fly a plane!” at 23; Earhart humping publisher George Putnam into writing about her. Yeah, Hilary Swank is great as the flyer, and Richard Gere is great as Putnam, but there’s never a sense of danger or substance to make it seem real. More chick-flick than bio-drama, which is a pity.

Paul Giamatti and Emily Watson star in this droll sci-fi comedy about an actor who, having trouble getting his head into an evil role, puts his soul in cold storage. Unencumbered, he gives the performance of his life, only to find that he can no longer recover his soul — it’s been stolen by a soap-opera actress!

DOCTOR WHO: THE WATERS OF MARS

The David Tennant “Doctors” have had wonderful special effects and a spot of celebrity, but all in all, they’re just too dark. Case in point: this well-made tale of the Doctor visiting a Mars exploration site that he knows is doomed. Why? Just to witness the horror? A good tale, to be sure — and damn exciting — but the ending is such a downer. We miss Tom Baker.

Blu-Ray release of a cinematic masterpiece. Leslie Caron will live forever as the wide-eyed innocent, destined to be a courtesan, whose platonic friendship with a rich playboy blooms into wondrous, colorful, song-filled love amid the machinations of the more jaded minds of 1900s Paris. A nine-time Oscar winner co-starring Maurice Chevalier, Louis Jourdan, Hermione Gingold, Eva Gabor and Jacques Bergerac. Our highest recommendation.

JE’CARYOUS JOHNSON PRESENTS: WHATEVER SHE WANTS

A joyously obscure adult-female fantasy about a 40-something woman (Vivica A. Fox) who opens the titular “ladies club” where men must pass inspection in order to enter: No baby-daddies, no bad credit, no pot-bellies and no living with your mama! But does she have time to find her own perfect man amid all this fun?

Yeah, this may be the lamest, most obvious “can we make it work?” modern love story we ever saw, but how can you go wrong with Jennifer Aniston and recent widower Aaron Eckhart as would-be lovers? Needed some nudity, but what doesn’t? A fun romance with great help from Dan Fogler, Judy Greer and Martin Sheen.

If you know the name “Tony Jaa,” then you (1) already own the original “Ong Bak” and have built a shrine around it, (2) have been lying awake a night ulcerating for this sequel to hit the streets, and (3) have probably injured yourself trying to jump a moving car with your legs spread too wide. ’Nuff said.

SHE-WOLF OF LONDON: THE COMPLETE SERIES

Welcome release of this too short 20-episode cult series from the early ’80s. Kate Hodge played “Randi,” an American girl, bitten by a werewolf, trying to find love and a cure for the mange in England (and later, California) with the help of a hunky professor. A low-rent Buffy, to be sure, but then Buffy never turned into a werewolf in an airplane bathroom!

The greatest Valentine’s Day gift imaginable for that special girl: A live performance of Larry the Cable Guy from Lincoln, Neb., on July 4, 2009! If you’ve never heard his “Prostate Professional” bit, then you have never had beer come out your nose. Also includes the immortal “Male Enhancement” rant.

A fabulous collection of four perfect sci-fiers from the WB vaults: “Them!,” “The Beast from 20,000 Fathoms,” “World Without End” and “Satellite in the Sky.” The first, of course, is the wildly entertaining tale of giant ants in the sewers of L.A.; the second is an early Ray Harryhausen stop-motion masterpiece. Hugh Marlowe and Rod Taylor star in “World,” a silly but fondly remembered bit of apocalyptic nonsense; and “Satellite” is a veddy British tale of an orbiting rocket carrying The Bomb — though the astronauts don’t know it! Wonderful.

THE HOUSE OF THE DEVIL

Oh, wow! What a ball! Tom Noonan and Mary Woronov are the “respectable” owners of a spooky mansion in this ode to ’80s Satanic ritual movies. Cutie Jocelin Donahue stars as the virtuous babysitter conned into watching their aged resident while the owners are out “celebrating the lunar eclipse,” unaware that her turn is coming later. A bit talky, but we liked it.

THE PLEASURE OF BEING ROBBED

And now for something completely different: A spaced-out young woman wanders NYC, meeting interesting characters and occasionally stealing things from them. They wind up owing her thanks. From there it gets weird. A big hit at the SXSW film festival of 2008.

Jean-Claude Van Damme and Dolph Lundgren, those genetically altered stars of the 1992 original, return in this sequel with wrassler Andrei “The Pitbull” Arlovski as another lab-made killing machine. He seizes the Chernobyl nuclear reactor in a global extortion bid and only Dolph and JCVD can stop him.