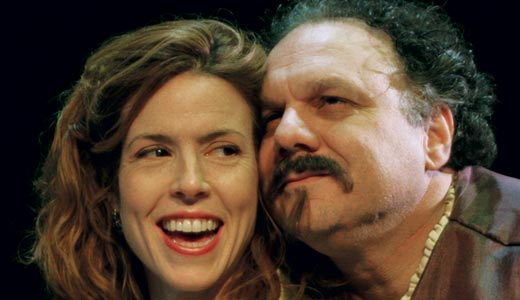 Much Ado About Nothing
A production by the Savage Rose Classical Theatre Company. Continues through Feb. 6 at Walden Theatre, 1123 Payne St. For tickets and information, go to www.savagerosetheatre.com or call 599-3011.

With its prickly wit and precise, surgical dissection of romantic love, “Much Ado About Nothing” is arguably the finest of Shakespeare’s comedies — which is to say, one of the finest comedies ever written. It’s a work filled with enough scams and traps to keep an army of amorous auditors tangled up for months.

And yet, it’s also a work fraught with drama — one that skirts the edge of tragedy and requires the nimblest of performances from the players.

Although recently formed, the Savage Rose Classical Theatre Company, which focuses on Elizabethan and Jacobean repertoire (along with classics from Greece to Grand Guignol), fields a very fine cast for its current production of “Much Ado.” The company, which debuted last fall with a dark, elaborately gaudy version of Marlowe’s “Doctor Faustus,” approaches “Much Ado” with a minimalist purity that eschews mannered distractions in favor of exploring the play’s stripped-down essence.

Director John Tillotson relies on a spare set, Shana Lincoln’s costumes (brilliantly designed to define not only character, but action) and clarity of line and intention to recount the tumultuous love of Benedick (J. Barrett Cooper) and Beatrice (Virginia Schneider). Last Friday at Walden Theatre, the results were funny, moving and effective — despite a few static moments that found the supporting cast listening to some of the finest speeches ever written as if simply waiting for a chance to get on about their business.

The play’s comedy hinges on a friendly plot to change Benedick and Beatrice from haughty cynics into earnest lovers — a device perfectly suited to Schneider’s regal bearing and Cooper’s disheveled, Falstaffian presence. But then, when Beatrice asks Benedick to undertake an unspeakable act to prove his love, the bright comedic light is clouded by dark, obscure drives in a grave and gripping scene that demands — and receives — all the gravitas the two players can muster.

In the grand scheme of “Much Ado,” all the principal roles require the actors to tread both sides of the comic-tragic divide, and the pleasure of this production is tracing the manifestation of those metamorphoses in voice, posture and pace.

Drew Cash and Hallie Kirk are gleaming innocents as the betrothed Claudio and Hero — until Hero is treacherously accused of infidelity. Andy Pyle’s Don Pedro is suitably regal. Gil Reyes, Jeremy Sapp and Nathan Kaplin serve up the evil conspiracies that drive the action to the brink (though what reads like Borachio’s repentance at the end sounds more like defiance on stage). Michael Harris’s Leonato shifts adroitly from amiability to anger. As Brother Antonio, Andrew Epstein gives the play a moral center at the critical moment. Katie Graviss, Eliza Yeager, Nick Smith and Patrick Zakem each bring finely imagined characters to the stage. And when Kyle Ware’s irrepressibly funny constable Dogberry and his sidekick Verges (Elliot Cornett) arrive on stage in a shower of absurdist malapropisms that sound like a parody of modern policing, the audience gets all the laughs it can stand.