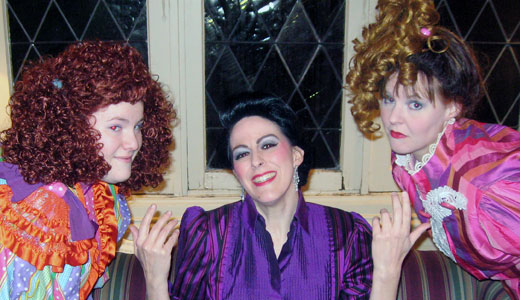 Over the years, enough scholarly papers have been written on the subject of gender identity and same-sex relationships that a person could easily spend years just trying to sort out what Judith Butler calls “the reified framework of the disjunctive and asymmetrical binary of masculine/feminine.”

Or, we could just all agree that, at the end of the day, romance is romance. Ron Lytle’s musical comedy “Oh My Godmother!” isn’t the least bit scholarly, but Lytle’s transformation of Cinderella into a musical fairytale with a gay, witty twist will no doubt offer scholars of the future plenty of academic grist. In the meantime, the current Pandora Productions staging — smartly directed by Michael Drury, with music from an off-stage trio (with Gayle King at the helm), and sets designed by Karl Anderson — is filled with bravura performances that squeeze every bit of comic and musical juice from a book and score that are, by turns, droll and quite dull.

Jacob Isaac (Albert, or Cinder-Albert, as he’s dubbed by his deliciously wicked, raven-haired, homophobic stepmother, Amy Holt) and Robbie Lewis (Prince) play the would-be lovers with all the earnestness you’d find in any canonic American musical comedy, singing their sentimental airs with coy innocence — a choice that carries its own sort of irony.

Surrounding them is a cast straight from San Francisco’s Castro district. Russ Dunlap is a perfectly turned, fey fairy godmother. Rusty Henly and Christephor Gilbert bring the hysterical back to hysteria when they fear that their son has gone straight. Albert’s shrieking stepsisters (Sara Renauer and Kate Holland) join with their mom for the amusing post-feminist anthem “Bitch!” and have a great comic turn in “There’s a Somebody for Everybody” (with brisk choreography by Gilbert, whose approach to the big production numbers is a hoot throughout). And then there is Prince’s posturing, narcissistic pal Payne, played with over-the-top energy by Jason Cooper, who, but for the accent, could have stepped straight from the set of MTV’s “Jersey Shore.”