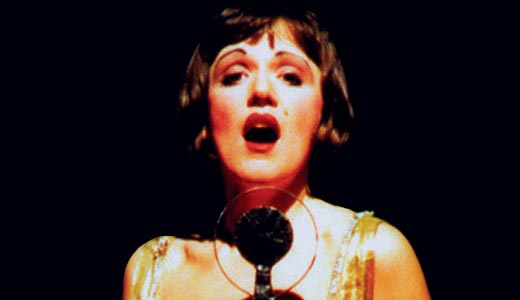 Ten years ago, the Jewish Community Center’s CenterStage theater company hired John Leffert as the artistic director of a three-show season. As the years went on, he became the cultural arts director, and then, in 2008, he was hired full time. From three shows to a seven-show season with special events and children’s shows, Leffert — and CenterStage — continue to make their mark on the Louisville theater scene. For his 10th year, Leffert has filled the season with some new material, but he has also brought back a few favorites, like the edgy “Cabaret.”

Based on John Van Druten’s play “I Am a Camera,” “Cabaret” is set in 1931 Berlin as the Nazis are rising to power. It focuses on the nightlife at the seedy Kit Kat Klub and revolves around the cabaret performer Sally Bowles and her relationship with American writer Cliff Bradshaw.

There are tables set up in the front of the auditorium to resemble a nightclub, and a few of the Kit Kat girls and boys linger and smoke as the audience finds seats. And I’ll say this for sure: The play calls for “seedy” and this cast delivers. Thanks to Sandra Simpson’s choreography and Leffert’s direction, there’s nothing sweet and pretty about this production — from pre-show to curtain call. It’s about a horrendous time in history shown through the scope of a cabaret.

The star performer of this cabaret is Sally Bowles, played by Melissa Shepherd. The actress is whimsical, alluring and easily captures the off-balance sense of the character, who is stuck between a naïve child and someone who’s seen the underside of the city for far too long. Her performance is strong and heartbreaking, particularly when she belts out a moving rendition of “Cabaret.” And the chemistry she shares with Cliff — played by Alex Craig — is obvious. Craig’s character is clean-cut and trustworthy, a difficult role to play when the rest of the cast is in underclothes and garter belts. Throughout the show, the emcee, Pete Lay, performs as master of ceremonies at the Kit Kat Klub. Lay is hilarious, bawdy and entertaining. The entire cast clicks, creating a convincing, alluring and shocking world.

The Kit Kat Orchestra sits onstage, above the action on the set. Gritty, dark and open, the playing space is wide enough for larger numbers while still allowing for intimate moments. Lighting designer Theresa Bagan beautifully creates a range of moods using techniques including harsh pools of light and pastel washes.

“Cabaret” is by no means a delicate musical suited for the family. It’s a punch in the gut that tackles tough issues, albeit through song. It’s funny at times, shocking at others, and will grab and hold your attention until the end.