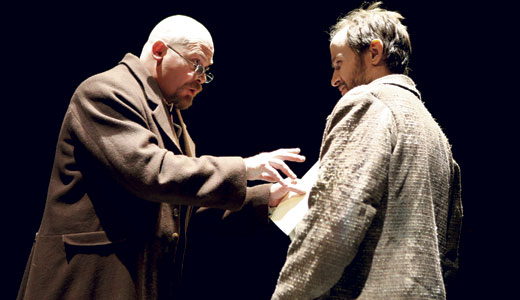 Crime and Punishment
An Actors Theatre of Louisville production. Directed by Sean Daniels. Continues through Jan. 31 in the Bingham Theatre, 316 W. Main St. For tickets or more information, call 584-1205 or visit www.actorstheatre.org.

Russian literature, like its landscape, has always seemed stark and cold. Enter translators Marilyn Campbell and Curt Columbus, who stripped “Crime and Punishment” down to a three-person, 90-minute production. It may be stark, but this passionate play is anything but cold. Both Campbell and Columbus, along with director Sean Daniels, are to be applauded for making this show engrossing from the start.

Set in St. Petersburg, the story follows a mentally troubled dropout student, Raskolnikov (Nick Cordileone), who kills a loan shark and her sister for reasons ranging from personal to ideological. He is questioned by Detective Porfiry (Lou Sumrall) and befriends Sonia (Jessica Wortham), a woman driven into prostitution by her father. And slowly, Raskolnikov breaks down — physically, emotionally and spiritually.

A theme that runs throughout is one of redemption, and the weight of this becomes clear in the final moments of the play.

Passion pervades from the beginning. Sympathetic from the first moment, Cordileone’s Raskolnikov is both fascinating and heartbreaking as he battles his own conscience under the unsettling intimidation of Sumrall’s Detective Porfiry. Sumrall’s performance is fine-tuned, and it’s only at the end that it’s clear this threat has become one of Raskolnikov’s roads to salvation. Meanwhile, Wortham’s portrayal of Sonia is loving yet not at all delicate. Her performance forces the audience to admire who she is without an ounce of pity.

Tom Tution’s set consists of a raised platform with an ax in the center, reminiscent of a sundial. There are shifts to the set at times, but for the most part, it is both open and contained, allowing the three actors to remain onstage throughout the play. And with the help of Daniels’ direction and Brian J. Lilienthal’s lighting, the story effectively moves to and from many locations. Lorraine Venberg’s costumes clearly help define the characters and their stations in life — and are malleable for Sumrall and Wortham to seamlessly transform into their many characters.

In the director’s notes, Daniels speaks to the design elements and collaboration involved in this production — and it clearly shows. The lights, the set, the paintings above and the costumes work together symbiotically. And with the actors, under Daniels’ direction, it all joins to create a play with life in it.

A great play is one that haunts, and this production certainly falls into that category. “Crime and Punishment,” stripped down to its core, will leave you with much more than just the cold Russian landscape to contemplate.