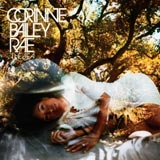 Rae was once a punk-band frontwoman, but she learned to stretch her musical horizons with the help of the saxophonist who became her husband. The singer gradually found her own sound: solidly in old-school R&B and jazz-pop, but with wings that flutter all over. But during preparations for the follow-up, hubby overdosed on a controlled substance, and the singer was suddenly a widow. Her sophomore record has finally arrived, and she’s not wallowing in mourning. The passages of poignant sadness are strong, but so are the uptempo numbers, which take lots of chances. “Blackest Lily” leaps out like a reinvention of early James Bond soundtrack singles. Rae continues to meander with her sound; she’s just not interested in crafting hooks and then repeating them. Amid the guitar-and-organ retro-soul arrangements are plenty of ear-candy moments, but they show up, and you’ve got to catch them before they move on. That’s a mature way to record for a restless musical spirit.