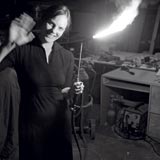 Scout Niblett distinguishes herself by often buttressing her spare, haunting songs with distorted electric guitar instead of acoustic. It’s a delicate balance to strike — the songs could easily sink into Bush “Glycerine” territory if she wasn’t careful — but thanks in part to producer Steve Albini, Calcination is menacing as often as it is lugubrious, and its high points often recall the more abstract moments on one of Albini’s greatest productions, the Breeders’ Pod. Maybe it’s just that the juxtaposition of Bjork-ish vocals and squashed, unaccompanied guitars on songs like “Pluto” is a combination so rarely heard, but Calcination feels all the more refreshing for it, and the intersection of Niblett’s fractured songwriting and Albini’s characteristically bracing production ultimately gives the album more teeth than the average offering from today’s disconcertingly genteel crop of singer-songwriters.